Heather Stanning, the British Army officer and double Olympic Champion who learnt to row and was nurtured into the British team whilst studying at the University of Bath, has won another national award.

She and Olympic women’s pair rowing partner Helen Glover, who were coached in Bath by Paul Stannard as part of the GB Rowing Team Start programme, scooped the President’s Award in the annual Sports Journalists’ Association poll.

They received their trophy from Patrick Collins, SJA President and a long-time columnist on the Mail on Sunday and Sunday Times, and the duo were interviewed on stage by veteran broadcaster Jim Rosenthal at the special event at the Tower of London.

Sports Technology graduate Stanning said of their remarkable unbeaten 39-race streak together which included two Olympic gold medals on the way: “We never felt complacent. We always respected the athletes we have raced against. It’s a fantastic honour to receive this award in Olympic year after so many great performances in Rio.” 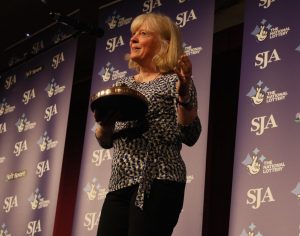 Caroline Searle, since 1996 a part of the Team Bath set-up at the University, also won the Doug Gardner Award for Services to Sports’ Journalism and to the SJA at the same ceremony.

Searle, a Bath resident and University graduate, has worked in the Team GB communications team for seven Olympic Games as well as multiple Paralympic and Commonwealth Games. For the past 15 years she has been press officer for the GB Rowing Team, working closely with the likes of Glover, Stanning, Sir Matt Pinsent and Katherine Grainger.

“I was totally shocked to receive such a prestigious award,” said Searle, the first press officer to receive the honour. “Last year’s winner was Sir Michael Parkinson which makes it doubly humbling really. It was fabulous to be recognised in a room packed with great journalists and athletes that I have so enjoyed working with over the decades.”