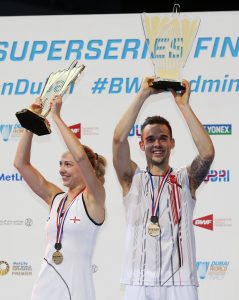 They have been placed in Group B this year alongside the Japanese world number 13 pair as well as fast-rising China duo Siwei Zheng and Qingchen Chen and two-time 2016 Superseries winners Kai Lu and Yaqiong Huang.

The Adcocks head to Dubai buoyed by their recent form having impressed in reaching the Denmark Open semi finals in October and finished the regular season with a quarter final in Hong Kong.  The hugely popular husband and wife duo are the only pair in Group B with past experience of the World Superseries Finals and go into their opening fixture holding a 1-0 win record over their Japanese rivals.

The World Superseries Finals is the culmination of the year-long global series of world class badminton events and sees the top eight players/pairs on the planet compete for prestigious titles.

The Adcocks know a strong run in Dubai this week, showcasing their own world class talents on the sport’s biggest stage, will propel elite badminton further into the sporting spotlight following a hugely successful summer in which GB badminton exceeded targets set by UK Sport.