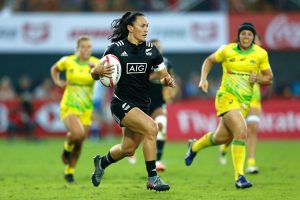 Australia and New Zealand played out yet another thrilling final in Dubai as the Black Ferns Sevens claimed the first round of the 2016-17 HSBC World Rugby Women’s Sevens Series.

In front of a packed house at The Sevens Stadium, New Zealand took revenge for their Olympic final defeat, dominating their rivals to win 17-5.

Australia battled to the end of the 14 minute final, but tries from Portia Woodman and two from Rebekah Cordero-Tufuga saw the Kiwis collect the gold medal and the Dubai Sevens Cup. Kelly Brazier was named HSBC Player of the Final.

The victory was especially sweet for new coach Allan Bunting, who said: “We’re pretty stoked with that win. It’s been a while since we got a win over Australia and i’m sure they’ll go away and come back a lot stronger as a result of that match.

“We always go out to win but we’re still learning a lot. Most importantly the girls went out and played with heart.”

You can see all the results from both days here.

Meanwhile, Russia and England faced off in the battle for third-place, with Russia claiming the bronze medal with an impressive display. In the inaugural Challenge Trophy, which replaced the former Bowl and Plate competitions, tries from Megan Williams and Lucy Mulhall helped Ireland seal a 14-12 win over a resilient Spanish side.

Earlier, in the first ever Challenge Trophy which replaced the former Bowl and Plate competitions, Spain took on Ireland in a tense affair on pitch one. Tries from Megan Williams and Lucy Mulhall, as well as some tough defence from the Irish, helped them seal a 14-12 win over a resilient Spanish side.Semi-Finals

Russia had much to prove in Dubai and were worthy winners over Canada in the semis, but they struggled against a slick New Zealand outfit. Nadezda Kudinova managed to breach the Black Ferns Sevens’ defence but another two tries from dream team selection Michaela Blyde saw them run out 24-5 winners.

Australia faced a youthful England side captained by Abbie Brown in a battle for a place at the final against New Zealand. Arguably the most impressive player was Tiana Penitani who shook off an injury sustained on day one to score two tries and inspire her side to a 31-10 win.

In the first match of the day on pitch two in Dubai, New Zealand took to the field against a South Africa side that wanted to prove their value, especially after missing out on core status for the series. But whatever cobwebs New Zealand showed on day one, they quickly blew off, with Blyde scoring a second half hat-trick that saw them cruise to a 39-0 win, securing a semi-final position.

Russia’s failure to qualify for the Olympics was surely a reason for their improved performances in Dubai, and they tore into Canada in the morning heat on pitch two. Tries from Kristina Seredina and Daria Bobkova set the tone and despite a converted try from the Canadians, Zdrokova ensured a dramatic win and a semi-final spot for Russia.

England looked relieved after their quarter-final clash with Fiji and with good reason. Fiji were by far the more dominant team and showed the traditional Fijian flair as they raced to a 17-5 lead. However England’s experience shone through and tries from Alice Richardson and Jo Watmore swung the match back in England’s favour, winning 19-17 in the end.

In the last quarter-final, Australia stormed out of the blocks to beat France 42-0, with Emma Tonegato adding another two to her tally as the French were brushed aside easily.