Loughborough Lightning suffered a shock defeat at the hands of National Badminton League newbies Suffolk Saxons, who produced the mother of all comebacks to beat last season’s finalists 3-2. Almost down and out in both the fourth and fifth events of the night, the east coast outfit showed tremendous resilience to overhaul the Loughborough University side, and could prove to be the surprise package of 2016/17.

It was a night of firsts for the Loughborough team; their first home game as Loughborough Lightning (formerly Loughborough Sport), their first NBL match in the University Badminton Centre and their first match against newcomers Suffolk Saxons. And the first event of the night went exactly to plan.

Loughborough University alumni Peter Briggs and Harley Towler for once didn’t leave it until the final set to secure victory in the men’s doubles. Taking the first game 9-7, the Milton Keynes based pair were quickly pegged back, but that only acted as motivation to drive them on to a convincing 3-1 win. 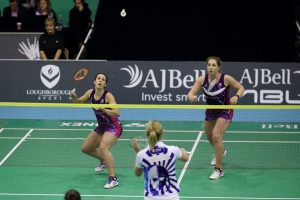 Up next was NBL superstar and Lightning captain Chloe Birch in the women’s singles. With arguably the toughest match of the night on her hands against Denmark’s Julie Finne-Ipsen, Birch got off to the perfect start, taking the first game 9-5. The Dane took a nail-biting second game 7-9, but Birch bounced back, crushing her opponent 9-2 in the third. The tide swung again though in the fourth, with the Loughborough student losing 3-9, so it went down to final, shorter fifth game. In the end it was a rare defeat for the Lightning player, but she’d be back on court to try and make amends in the women’s doubles.

Olympian Henri Hurskainen made light work of his singles match, sweeping aside his young opponent in straight games. Semi-finalist at the Scottish Open over the weekend, the Swede was clearly in fine form and he once again lived up to his ‘hoover’ nickname, much to the delight of the vocal home crowd.

Of his victory the Loughborough talisman said: “I felt in control from the beginning, relaxed and played my own game. The last few weeks I’ve played very well and this week in Scotland was a few steps forward for me, so right now I’m feeling more and more confident. It’s always nice to hear the ‘hoover’ from the crowd and it’s so nice to be back and playing here again.”

Back on court and looking to secure the match night victory for Lightning was Chloe Birch and her women’s doubles partner Viki Williams. The student pairing started well, taking the first game 9-5, backing it up with a thrilling 9-8 win in the second. Despite losing the third, the girls in purple looked like they’d wrapped it up at 8-5, but somehow the Suffolk duo fought back to take it to a tie-break.

Despite showing class and guts in equal measure Birch and Williams couldn’t get across the line, succumbing 2-5 in the fifth to leave it all to play for in the final event, the mixed doubles.

Loughborough University students Greg Mairs and Jenny Moore looked composed, despite the obvious pressure, as they hit the ground running in the decider. Taking the first game 9-6 they really started to play some terrific badminton and raced to a 9-1 win in the second game.

With the finish line in sight and the Loughborough pair opting for their PowerPlay at 7-8, they had the chance to wrap up the match night. A contentious line call against Mairs’ brilliant back hand smash kept the Saxons in the event, and from there it all unravelled for the hosts. Losing the fourth game 4-9 it went to a tie break, and Suffolk opted for their PowerPlay. Winning the rally to go 0-2 in front, it was match point Saxons and they duly converted to wrap up match night victory.

A stunned Greg Mairs said post-match: “It was a bit of shock – I expected to win that and I expect to win most games when I go on. I’m annoyed to lose that. We could have won five-nil tonight; it was so close and it shows what the league is about – anything can happen. A couple of points here or there and it’s gone.

“With seven teams in the league this year we’ve got a few more matches to go and hopefully we can continue to field strong teams and get a few good wins on the board.”

You can see highlights of the match on BT Sport 1, Thursday night at 8pm.