Worcester Valkyries scrum-half Bianca Blackburn has picked up the Worcestershire County Council Player of the Month award for October. 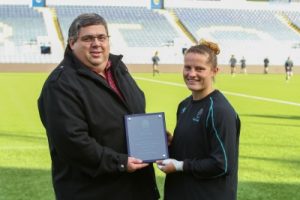 The winner, which is chosen by the coaches, was presented the award by Cllr Richard Udall ahead of Saturday’s game with Richmond Women at Sixways.

Valkyries Director of Rugby Donna Kennedy said: “We’re pleased to announced Bianca as our Player of the Month.

“Bianca is an outstanding player within her own right and I believe that she is playing the best rugby I have seen her play at present.

“She has matured as a player and is a key link within our team, driving and controlling our forwards and working well with our backline, to allow us to play the way we want to.

“In my opinion, she is by far the best scrum-half within the Women’s Premiership at present.”

Blackburn added: “I’m proud to have been selected for this award and I’m going to work even harder to try and win it again during the season.”