Saturday 26 November London Boxing hosted an All Female Gala of Boxing This Girl Can Box – a total of  19 bouts took place, giving the opportunity to 38 girls and women to build up vital competitive experience. 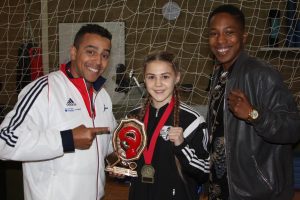 On display throughout the day, for the lucky spectators, was some great talent and the atmosphere was excellent.

The Best Bout of the Day, were awarded gloves from Cahoons and that went to Adranne Phebey v Katie Smith. Also, it should be noted that many females were making their debut yesterday and they absolutely boxed their socks off. Win or lose, be proud of yourselves. 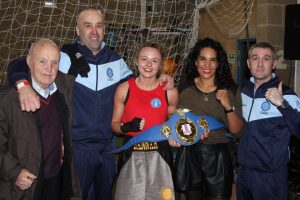 A very special thanks to Ian Harrison for travelling down with the NW Warriors team, Rachel Bowers, Tosh Lines for being Terri Kelly’s wing person on the day, organising the runners and sorting the raffle. Quinton Shillingford MBE, Lesley Sackey and Cherrelle Running Brown for taking time out of their busy schedules to cheer the boxers on and award the trophies.

Let’s not forget the hard working officials, who worked two shows back to back. Double Jab who secured the venue and had runners on-hand all day. Lee Wilkins at Brawl Sports who sponsored the trophies, BoxFit made all the team vests and runner T-shirts. Cahoonas sponsored the best bout gloves. St Gerards sponsored the lovely Best Junior and Best Senior trophies.

*Terri Kelly has been a champion of women’s boxing since the early 80s.  She is an important part of both Haringey and London Boxing Clubs and organiser of the Haringey Box Cup.

Terri is also on the Championship and Rules Commission for England Boxing. Since getting involved she has been supporting and working for parity for women in boxing. Terri helped organise and run the very first all female championship in 2007 and runs regular squads so the girls get regular sparring opportunities.

Terri matched and organised the showcase Diamonds in the Ring event as part of the Elite finals in 2014 (women were not allowed to enter the main event then). The following year, women were included in every championship run by England Boxing.