Britain’s Lucy Shuker was among the winners as the University of Bath Sports Training Village hosted five fantastic days of world-class competition at the inaugural Bath Indoor Wheelchair Tennis Tournament. 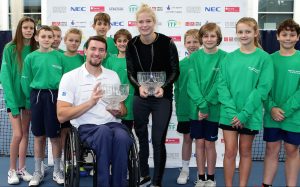 Shuker, a double Paralympic medallist from Taunton, maintained her unbeaten record with Diede de Groot of the Netherlands as they claimed the women’s double title with a 6-2 6-1 win over second seeds Marjolein Buis and Katharina Kruger in the final.

De Groot also took the singles crown – her fifth individual success at an ITF Level-1 event – by producing a clinical display of big serving and fierce groundstrokes to beat Germany’s Sabine Ellerbrock by the same scoreline.

Belgium’s Joachim Gerard also left Bath with two trophies, dropping just one game as he beat Argentina’s Gustavo Fernandez 6-0 6-1 in the men’s singles final before teaming up with Sweden’s Stefan Olsson to overcome Fernandez and Maikel Scheffers 3-6 7-6(3) 10-4 in a high-class contest.

Israel’s Itay Erenlib beat Britain’s James Shaw 6-2 6-2 in the quad singles final, a day after they had teamed up to claim the doubles crown with a 6-1 6-0 victory over British duo Richard Green and Laura Swetman.

For the victors, it was the perfect preparation for the season-ending NEC Wheelchair Tennis Masters taking place in London later this month.

Shuker said: “Diede is a lovely player and it’s great to win the title here in Bath. We’ve both said we’ve really enjoyed playing together over the last few tournaments and it’s something we would like to carry on.”

Following her singles success, De Groot said: “To win the title here in Bath is great. I am feeling good and looking forward to building on this at the Singles Masers in London.”

Gerard, a finalist in the Australian Open this year, added: “I am very happy to win the title here in Bath. It is good preparation for me as I am heading to the Singles Masters in just under two weeks where I will be defending my title and this will give me a lot of confidence.”

The UNIQLO Wheelchair Tennis Tour competition, organised by the Tennis Foundation, was staged as part of the University’s 50th-anniversary celebrations.

More than 50 matches were played over the course of five action-packed days on the University’s indoor courts. Local families also came along on the last day to take advantage of a free ‘have a go’ tennis session, as well as cheer on the finalists.

Barry Scollo, Head of Tennis at the University of Bath, said: “It has been both a pleasure and an honour to host world-class players at the very top of their game and they have treated us to some outstanding tennis during the past week.

“This is the first time we have hosted a wheelchair tennis tournament at the Sports Training Village and it has been a great success. It was particularly pleasing to receive positive feedback from the players and the organisers about the facilities and staff here.

“It is always great working with the Tennis Foundation, they are always pushing to improve the sport and raise the standards. They are already talking about ideas for next year and it would be fantastic to see the tournament back in Bath.”

For more information about tennis at the University of Bath, including details of coaching and court hire, visit here.

You can find more information on the Tennis Foundation here..