Five Olympians feature in England Women’s squad for the tournament in Dubai (1-2 December). 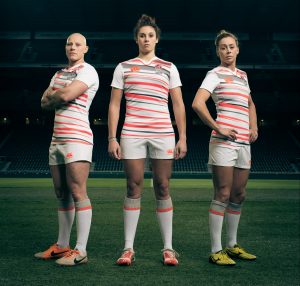 Abbie Brown, who made her debut on the World Series circuit in Sao Paulo earlier this year, will captain the side and is joined by fellow Team GB names Heather Fisher, Alice Richardson, Jo Watmore and Amy Wilson Hardy.

There are five new names for England, with Lauren Cattell, Deborah Fleming, Katie Mason, Kelly Smith and Millie Wood all having their first taste of the global sevens competition in Dubai.

England are drawn in Pool C and will kick off the opening day against Spain, before facing Canada and Brazil.

The squad travel on Saturday, with Simon Middleton overseeing the coaching programme, supported by James Bailey for the first of a new six-leg series with further rounds in Sydney, Las Vegas, Kitakyushu, Langford and Clermont-Ferrand.

Middleton said: “Our focus this season is very much to qualify for the 2018 World Cup through the HSBC World Rugby Women’s Sevens Series.

“We have a mix of new players and returning Olympians within the squad. It is important that we invest game time with the new players as tournament experience is critical if we are going to be competitive on the world’s biggest stages down the line.

“The squad has been working hard to become physically conditioned to play sevens and we look forward to getting the World Series underway.”

Last season England finished fourth in the HSBC World Rugby Women’s Sevens Series, winning the Langford leg and narrowly losing out to Canada on third after the final round in Clermont-Ferrand.

England Rugby, with official kit supplier Canterbury, have also revealed the new Sevens home and alternate kit which will be worn by the men’s and women’s teams on the HSBC World Rugby Sevens Series circuit for the 2016/2017 season.

The design brings to life key elements of the sevens game, agility and speed, with the turbine design symbolising the dynamic movement which is unique to sevens rugby.

The jersey also incorporates the latest innovative shirt technology to enhance speed and agility, with VapoDri ensuring the best performance in all weather conditions and 3D body mapping used to help ventilation and regulate body temperature throughout the game.

The new England Sevens home and alternate rugby range is now available on www.canterbury.com and www.englandrugbystore.com and is in stores from the 21st November.