The game-changing AJ Bell National Badminton League (NBL) will return to the scene of its first ever fixture after centre:mk in Milton Keynes was confirmed as the host venue for the season ending final – The Ultimate Smashdown – on 8 February 2017. 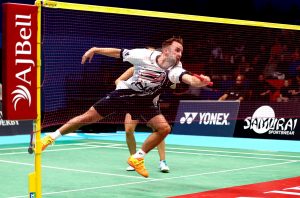 Over 1.1 million UK households have tuned in to watch monthly fixtures on TV (with this season broadcast on BT Sport) whilst sell out crowds have packed out iconic venues nationwide as families and sports fans enjoy the drama and entertainment of live badminton.

The Final, dubbed The Ultimate Smashdown, will see the league’s top two teams go head to head to be crowned AJ Bell NBL Champions in front of a live crowd and a nationwide television audience.

Played on a specially laid badminton court in the iconic Middleton Hall, The Ultimate Smashdown will take place just 48 hours after the end of the regular season, giving sports fans the a chance to see their favourite teams and top badminton players, including Olympians, Team GB stars and top talent from Europe and Asia.

Adrian Christy, Badminton England Chief Executive, said:  “The AJ Bell National Badminton League has come a long way since that first fixture in centre:mk but I am delighted that we able to go back to such an exciting venue that started the AJ Bell NBL experience.

“centre:mk prides itself on innovation and this is a value that aligns perfectly with the AJ Bell National Badminton League.

“Badminton England is also proud to be able to play its part in the 50th anniversary celebrations of Milton Keynes and support its aspirations to become a destination for top class sport.

“By delivering the AJ Bell National Badminton League final in centre:mk, we will endeavour to serve up top class sporting entertainment for fans and families in the local community and beyond to come out and enjoy.”

Tickets for the AJ Bell NBL Final – The Ultimate Smashdown – will go on general from December 2016.

You can find more information on the AJ Bell National Badminton League, including team news, tickets and fixtures here.