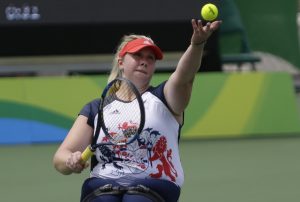 Held at the world-class University of Bath Sports Training Village, the event will make its debut in the West Country from 15-19 November with a stellar line up of Paralympic medallists and local stars competing for the title. Spectators are welcome and admission is free.

Women’s doubles bronze medallist from Rio Lucy Shuker will be heading the home challenge in the women’s division. Shuker, who currently trains in Taunton, will be joined by fellow Rio Paralympian and University of Bath alumni, Louise Hunt.

“I am really looking forward to competing in Bath this year, I’ve had a recent string of successful tournaments and I feel in a really good place both mentally and physically,” said Shuker.

“Bath is very close to my home training base in Taunton and I’m looking forward to seeing a few familiar faces at the venue supporting me, that is always a benefit of a home tournament.

“I have trained at the University of Bath on a number of occasions. We had a one-week training camp there as part of ParalympicsGB’s ‘year to go’ preparations before London 2012 and I believe there is still a very embarrassing banner in the sports centre from the early days of my career!

“Wheelchair tennis is a fantastic sport to watch and I would highly recommend coming down and checking out some play. The majority of the top players in the world will be action in preparation for the end-of-year Masters event at the Olympic Park in London.

Wiltshire-based Hunt, who gained a Foundation Degree in Sports Performance from the University of Bath in 2012, will be returning to familiar ground as she aims for success in the ITF 1 graded tournament on the UNIQLO Wheelchair Tennis Tour.

“This will be my last tournament of the year, so I’m looking to finish 2016 on a high,” said Hunt, who represented ParalympicsGB at both London 2012 and Rio 2016.

“I’m really excited to be playing a tournament in Bath this year. It’s my first UK event post Rio, so it’ll be nice to be back on home soil – especially at my University. I always loved attending there and it will be great to compete somewhere I know so well.”

In the men’s draw double Paralympic silver medallist Alfie Hewett will lead the British charge against a strong field featuring six of the top 10 players in the world. Paralympic bronze medallist Joachim Gerard will be using Bath as preparation for his NEC Wheelchair Tennis Masters title defence at the end of November.

There will also be British Paralympic stars in the Quad division (for players with an impairment in three or more limbs), as Rio silver and bronze medallist Andy Lapthorne heads the draw.

Alongside the world class sport, the Tennis Foundation will also be running a free Come and Try Session on Saturday 19th November from 11-1pm. The session caters for all abilities, disabled and non-disabled and everyone is encouraged to come along and try out the game. Coaches will be on hand to give tips and all equipment is provided free of charge.