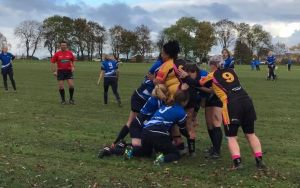 From the off Odsal wanted this game and their determination showed with a couple of drives and a storming run by Nichola Williams down field to bring Odsal within easy reach of the opposition try line.

Quick play then saw Beth Greenwood pushing through for the 1st try of the game, with the conversion put neatly through the posts by Hanna Callaghan. 6-0

The try lifted Odsal and from the restart they showed there was more to come but Liverpool held out for a spell until Odsal had a injury replacement resulting in Kara Kolvin only on the field two minutes before making the breakthrough and pushing over the line for another try.

Hannah missed the conversion by a whisker taking the score to 10 – 0.

Odsal continued going forward with strong running from Amelia Watt down the wing and Shannon Robinson running the angles.

Liverpool held Odsal out until  Nicola Peat zipped through Liverpool’s defence, from the scrum, for a virtually full length of the field try – conversion by Hanna Callaghan taking the Sirens to 16-0.
Odsal were dominating and strong running from Beth Greenwood brought Odsal to the line for another try from Kara Kolvin 20-0.
And Odsal continued to dominate, with good passing from Sarah Kennedy and Gemma Fordham and strong running from Leisha Williams.  Liverpool held Odsal out and made some headway up the hill but Odsal’s overwhelming enthusiasm prevailed and they were over for another try, this time by Leisha Williams.  Shortly afterwards Gemma Fordham was over for a well deserved try.
With good defence coming from both wings Odsal Sirens held out for a 30 points to nil lead at the half time whistle.
In the 2nd half Odsal were expecting Liverpool to be strong with the downhill advantage, and they were with some lengthy runs from Liverpool and Odsal struggled to keep up with the pace the Liverpool girls were showing.  And despite some strong defence work it wasn’t long before Liverpool found a gap in the Sirens’ defence for a long run to drop over the line for their first try of the game 30-4.
Liverpool were showing promise and fought hard to break the Sirens defence again, but to no avail as Odsal’s strength kept them at bay.
Although Odsal made ground, Liverpool stood their ground as they also defended well.
Up to this point both teams were up for this game and it was appearing to be a game of two halves as Liverpool seemed to have the upper hand and were on for a come back until an injury stopped play on the 57th minute with the score at 30-4.
We all hope there is a speedy recovery for the player involved and wait to hear if the game is to be replayed.
Tags: Liverpool University, Odsal Sedbergh Sirens, Rugby League, Winter League