A match-winning 4-24 by left arm spinner Alex Hartley, and unbeaten 57 from Natalie Sciver against the West Indies in the final One-Day International (ODI) between the two sides in Kingston today has helped England to secure a hard-fought 3-2 ODI series victory in the Caribbean.

West Indies women won the toss and elected to bat 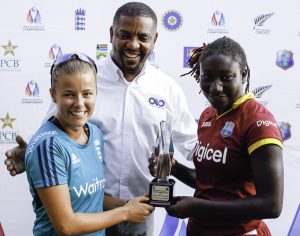 Alex Hartley was named as player of the match while sharing the award for player of the series with West Indies Captain Stafanie Taylor.

Speaking immediately after play today, England women’s captain, Heather Knight, said: “I’m really happy with how we have stood up and delivered a strong, winning performance in the final match of the series today.  To come to the Caribbean and beat the ICC Women’s World T20 champions on their home patch, in tough conditions, and with a couple of set-backs along the way, shows how much character, desire and talent there is within this squad.

“Throughout the five matches, momentum has constantly shifted between the two sides, which shows how evenly matched the teams are.  It is a brilliant feeling to win the series decider today, and I know that we will all take a lot of belief and confidence from this experience.

“We are learning and growing as a squad all the time, and we are already looking forward to the next challenge of taking on Sri Lanka in Colombo next month.  We are well placed in the ICC Women’s Championship table, and hopefully we will put in some strong performances against out there to secure our place in the ICC Women’s World Cup next summer.”

The 5 wicket win at the iconic Sabina Park today was the third of three ICC Women’s Championship matches played within the five-match ODI series, with England claiming two victories, in the first and last encounters.  The 2-1 score line in England’s favour means that Heather Knight’s side now sit in second place on 23 points in the ICC Women’s Championship table, having taken four of the six points on offer in Jamaica.  With one round of the competition left, England now need just one win out of three against Sri Lanka next month to guarantee that they will secure one of the four automatic qualification spots available for the ICC Women’s World Cup 2017 on home soil.

Australia (30 points) are the only team to have already booked their place in next summer’s flagship ICC 50-over event, with the West Indies (22 points) and New Zealand (20 points) currently sitting in third and fourth in the table, going into the final round of ICC Women’s Championship matches.

The ICC Women’s World Cup 2017 will be the first time that England have hosted the event since 1993, when Karen Smithies led England to a memorable 67 run victory against New Zealand in the final at Lord’s.  The ticket ballot for next summer’s final on Sunday 23rd July, also at the Home of Cricket, opens tomorrow (20th October).

“Over the past couple of years we have seen the growing appetite for international women’s cricket in England.  This is an exciting time for the women’s game around the world and I hope the tournament will help us drive interest and increase participation.  With tickets to the final at just £5 for under 16s, this is a great opportunity for young people to experience the game at the Home of Cricket.”

England women will now have a short break before taking on Sri Lanka in their final round of the ICC Women’s Championship next month.  All three matches in that series will take place at the R. Premadasa International Cricket Stadium (RPICS) in Colombo on 12th, 15th and 17th November.

England women’s squad for the tour to Sri Lanka will be announced in due course.