Loughborough Lightning is delighted to announce the signing of overseas duo Jo Trip and Vanessa Walker ahead of the 2017 Vitality Netball Superleague season. 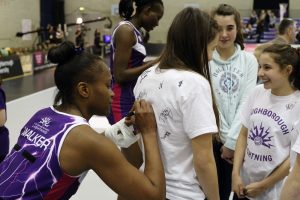 Equally adept playing either goalkeeper or goal defence, New Zealander Jo Trip re-signs for  Lightning after a strong debut season in northern hemisphere netball in 2016. Previously plying her trade in the ANZ Championship with Kia Magic and Canterbury Tactix, the 26 years old has a wealth of experience to offer a relatively young Lightning squad.

Loughborough University graduate Vanessa Walker also had a great season in a Lightning dress in 2016, the goal attack regularly on the score sheet alongside star shooter Peace Proscovia. Walker has also been in good form for Jamaica and returns to Lightning having first played for the franchise in 2013.

Of the announcement Trip said: “I am absolutely thrilled by the opportunity to play for Loughborough Lightning for a second season. Last season’s result was just a small step in the right direction for Lightning and I am very excited to return to the fold, provide some consistency in personnel and work with the new young talent within the Lightning programme.

“As the girls tough out the pre-season in Loughborough, I am back home in New Zealand working hard to prepare myself to hit the ground running when I touch down early in the New Year, with the focus to help the team substantially improve on last year’s result.”

Teammate Walker added: “I am super excited that I have re-signed with Loughborough Lightning for the forthcoming season. I thoroughly enjoyed playing for Loughborough last season and I have seen where I have grown physically and mentally. I look forward to re-joining the team and picking up where we left off, having more improvements, excelling and seeing the team grow even more under the leadership of Karen and Olivia.”

Of her overseas signings Lightning Head Coach Karen Atkinson said: “The focus of our recruitment this season has been getting the right balance of exciting youth, established Super League players and continuity in our team.  The return of Jo and Vanessa, who are both such experienced players and provide valuable leadership to the squad, is fantastic.

“The aim in 2017 is to build on last season’s performances, and working with players that have been part of our franchise and culture before will enable us to do that, without starting from scratch.  I am looking forward to seeing how they can both take their game forwards this season and build on their good work last year.”