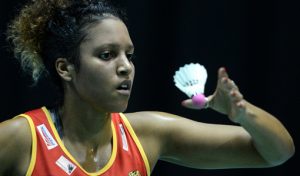 England’s top ranked singles player Chapman flourished in the AJ Bell NBL last season winning 5 of her 7 events and is now preparing for Monday’s visit of Suffolk Saxons, one of two newly established sides added to the AJ Bell NBL, to the Great Hall at University of Birmingham

Chapman, who will face former England international Caroline Westley in the season opener, said “I think having the new teams in the AJ Bell NBL this season is really important for the sport.

“It shows there are more people out there that want to watch badminton and be involved in it.

“We can make sure everybody will get a chance to play; we’ve got more teams which means more matches. I think it’s great for the sport and it’s really important we all get behind the AJ Bell NBL.”

With Suffolk Saxons and Bristol Jets bringing new faces and taking the total of teams to a Magnificent 7, the AJ Bell  NBL continues to showcase the very best of British badminton, as well as a host of international stars, and world No.85 Chapman insists she can’t wait to get back on the court.  10 Rio 2016 Olympians will compete this season, including seven of the Team GB stars as the quality increases.

“I’m really looking forward to the start of the new season and getting back into the NBL action,” Chapman said. “Last season was really good, I had some good wins and some really tough matches that I came through and it was really good to be part of.

“With it being such a short game it’s important to get on top of your opponent straight away and keep that momentum going.

“For the team, it’s really important if we can get a win in the bag in the first match night it puts you in good stead for the next one.

Birmingham Lions welcome Suffolk Saxons to the Great Hall at University of Birmingham on Monday 17 October, starting at 6pm.  For tickets, visit here.