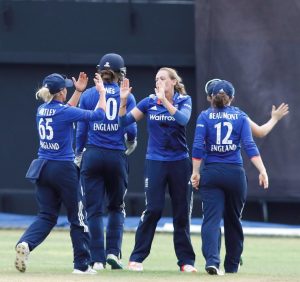 The Yorkshire opener put on 95 with Natalie Sciver, who made 58, as England made 220 at Sabina Park. The recalled Jenny Gunn, Laura Marsh and Alex Hartley then took two wickets apiece to help bowl West Indies out for 108.

The victory, which put England 2-1 up in the series, also counted towards ICC Women’s Championship points and two more wins will mean automatic qualification for next summer’s World Cup.

With Monday’s stunning collapse – England lost six wickets for just three runs – still raw in the memory, there understandably might have been a few nerves when Heather Knight won the toss and opted to bat.

The early departure of Tammy Beaumont and Georgia Elwiss – the latter undone by a lethal inswinging yorker from Deandra Dottin – would have caused further flutters. 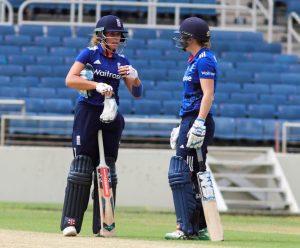 Winfield and Knight regrouped and put on a patient 46 but it wasn’t until Sciver arrived at the crease did England begin to motor.

Exchanging singles early on in their partnership, Winfield and Sciver grew in confidence and began to hit boundaries.

Winfield signalled her intentions by flamboyantly cracking Shamilia Connell over extra-cover for four while Sciver struck the only maximum of the innings when she launched the same bowler over midwicket.

But, having added 95 at five-an-over, the pair succumbed in quick succession; Winfield bowled by Dottin and Sciver caught at backward point after middling a reverse sweep. 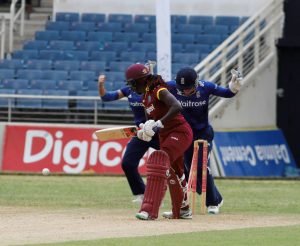 Danni Wyatt and Amy Jones scurried well as boundaries dried up but England’s tail made a mess in the final overs, losing their last five wickets for just 12 runs.

The Yorkshire quick pinned Hayley Matthews in front before Gunn justified her selection by bowling the dangerous Stafanie Taylor and teasing Shaquana Quintyne to chip straight to cover.

West Indies were reeling at 64 for five when Danni Wyatt ran out Merissa Aguilleira and Marsh trapped Britney Cooper lbw.

Knight struck a crucial blow when Dottin picked out Brunt on the legside boundary and England wrapped up victory soon after.

Middlesex spinner Hartley dismissed Shermaine Campbelle and Afy Fletcher in the same over, taking her total to nine wickets in the series, before Elwiss and Marsh finished it off in clinical fashion.