The England Women’s U17s have successfully navigated their tricky group and managed to beat Brazil in order to earn a place in the Quarter Finals of the World Cup.  The team and coaches are delighted and so too are their merry band of supporters, without whom none of this could have happened. 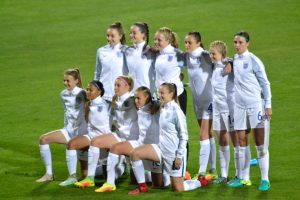 Throughout their incredible journey the team have been cheered every step of the way by an incredible set of parents and supporters. This team has been together for a long time and not only have they bonded but so too have the supporters.

The parents’ group has of course been with the team from the beginning and their pride as the girls qualified for the World Cup in Jordan was tangible. It’s not always easy to be able to travel to support, time has be taken from work and of course it is expensive, however, as soon as the team qualified their supporters were determined to be there too.

Here is a brief blog from Carol Russo mother of Alessia [who scored the winning goal against Korea DPR in the U17s first group game and won Player of the Match in the must-win game against Brazil]. 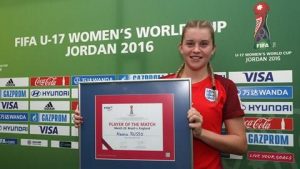 “The team are so close and really support each other. They are not only a very talented bunch but are thoughtful, caring and bonded.

“The FA staff affiliated to this group are also very special. They make the girls feel like they are with family – the girls love them all.

“The staff at the FA have kept in touch with us [the parents] with regards to itineraries and education etc and have enabled us to meet up with the girls twice, for a bit of family time, which is invaluable.

“This parents group are all good friends. We have a whatsapp group (with about 45 relations on it!) so we chat in between tournaments and camps and use it to wish the girls good luck for debuts, congratulations on goals for their respective clubs and generally to chat, have a laugh and reminisce. 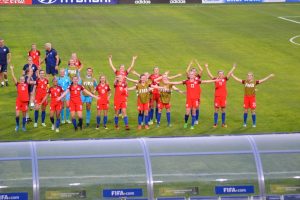 “We make ourselves seen and heard at the games and the girls love it!

“Jordan is beautiful. The people are so friendly and gracious. We have all visited the stunning ancient sight at Petra and floated in the Dead Sea together!

“The Amman International Hotel have been superb in accommodating such a large group and organising coaches etc for the trips to and from the games (we even had the coach driver and guide in England shirts supporting the game!)

“We will be going from 40+ to less than 10 for the game against Japan (on Friday) so we will have to shout louder and make our presence known, although we have recruited a few from the British Embassy, who kindly invited us over on Friday for a fabulous evening of entertainment. Many of the parents have had to go back to the UK because of work commitments but all are desperate to return so maybe we’ll have a few extra on the day! Wish us luck!”

And we do, we wish them all the luck in the world and will be following every kick.