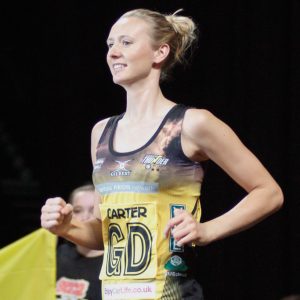 The pair, who have been with the club since its rebirth in 2008 and have formed a vital and unmatched partnership at the top domestic level over that time.

Head coach Karen Greig, who also played with the duo during her time at Thunder, said it was ‘massive’ to have both players back next season.

“They link together so naturally, Kerry thrives on confidence and Emma is the kind of player that gives her that,” the former England shooter said.

“Kerry when on top of her game can challenge any shooting circle in the league her unforgiving style of play and her ability to read the game sees her being able to both fly out of the circle and hunt the ball – and challenge the aerial ball in the circle.”

Greig added that Dovey ‘complements’ her partner in the defensive third with her ‘relentless’ playing style.

“Players hate playing against Emma as she will run and tag players all game long and pounce for intercepts at the right time,” the Thunder coach added.

With two Superleague-winners’ medals each under their belts, their time on court in the Black and Yellow dress is sure to rub off on the less experienced members of the squad. Something which has not gone unnoticed by Greig.

She said: “With these stalwarts back in the fold they will show great leadership from the back and be the real backbone in the Thunder line up this season.”

These latest additions bring Thunder’s squad for 2017 up to five, with Gabby Marshall and Kathryn Turner also returning to the fold while Bea Skingsley joins from the now defunct Yorkshire Jets.

More players are set to be announced over the coming days.