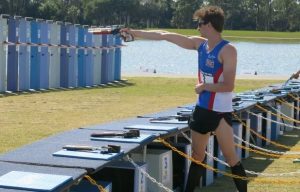 2016 Olympians Jamie Cooke and Samantha Murray will head to Moscow this weekend to represent Pentathlon GB in the Kremlin Cup. The invitational event will see 12 nations competing in a Mixed Relay on Sunday 2nd October.

Both athletes will be making their debuts at the event and the competition will mark the duo’s first return to action after the Olympic Games where Cooke finished 14th and Murray 9th.

Cooke in particular has enjoyed a stellar year following his victories at World Cup 4 in Kecskemet and the World Cup Final in Sarasota and will be looking to finish his year on a high. Meanwhile, Murray’s 9th place in Rio followed up her London 2012 silver medal and meant she was the highest placed finisher of the former medallists in the field.