Paul Blake today joined the ranks of University of Bath-based athletes to be crowned as Paralympic Champion as he won the T36 400m title at Rio 2016 ŌĆō ParalympicsGBŌĆÖs 50th gold medal of the Games. 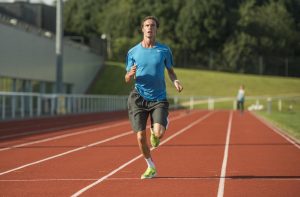 Blake, coached by Rob Ellchuk at the Sports Training Village, upgraded on the silver he won at London 2012 in emphatic style as he stormed away from the field in the last 100m to win in a seasonŌĆÖs best time of 54.49secs.

ŌĆ£I am lost for words,ŌĆØ said Blake. ŌĆ£In 2012 I was fortunate enough to win silver and bronze but I have finally done it and got gold. All of the hard work has paid off.

ŌĆ£I knew we were on 49 golds. ItŌĆÖs incredible what everyone else has done so far and for me to help out with the tally is great.ŌĆØ

Looking ahead to a potential second title in the 800m, Blake said: ŌĆ£I am just taking each race one at a time. IŌĆÖll rest up and weŌĆÖll see what happens tomorrow.ŌĆØ

Blake is the third athlete to be crowned as Paralympic Champion while training at the University of Bath, joining swimmers Sascha Kindred and Matt Walker who both won gold at the Sydney 2000 Games. Kindred claimed his seventh title in the pool in Rio this week.

Stephen Baddeley, Director of Sport at the University of Bath, said: ŌĆ£What an outstanding achievement by Paul, we are all incredibly proud of him.

ŌĆ£During the seven years he has spent working with Rob Ellchuk here at the Sports Training Village, Paul has developed into a truly world-class performer and fully deserves this title of Paralympic Champion.

ŌĆ£He is already an inspiration to students, staff and his fellow athletes at the University thanks to his positive attitude, the dedicated way he approaches his sport and his achievements on the world stage. WeŌĆÖre all looking forward to seeing Paul return to the University with his gold medal!ŌĆØ

Sophie Kamlish, BlakeŌĆÖs training partner, will also be looking to get onto the podium when she runs in the T43/T44 100m on Saturday. The heats are scheduled to start at 4.24pm BST, with the final taking place at 12.34am on Sunday.

Also hoping to pick up a medal on Saturday is University of Bath Natural Sciences graduate Alexandra Rickham.

She and partner Niki Birrell currently sit in the bronze-medal position in the SKUD18 two-person keelboat class but level on points with second-placed John McRoberts and Jackie Gay of Canada.

Rickham and Birrell have three more races to go, two on Friday before the double-points medal race at 5.05pm on Saturday.

What is the Future for British WomenŌĆÖs Sevens?.

Hi Mario, I do not think it is ŌĆśunderstandableŌĆÖ or acceptable that Celtic players still feel the need to come to England. It is a black mark against the Irish, Scottish and Welsh Unions that this trend continues unabated. ItŌĆÖs nice for the Prem 15s to be able to think itŌĆÖs the greatest league in the world (outside NZ?), but it doesnŌĆÖt help womenŌĆÖs rugby in general. I mentioned TounesiŌĆÖs move simply as the latest in a series of moves of players from continental Europe to France and England. It is perfectly understandable why players from Germany, Holland, Hungary, Sweden and so on, choose to come to further their careers. Now that the Azzurre are getting ever closer to England and France in standard, it would be preferable to see their top players staying with their home clubs. Every nation needs to provide as many top coaches as possible. My guess is that ItalyŌĆÖs need is greater than EnglandŌĆÖs and FranceŌĆÖs. But no European country has yet discovered a way of equalising its elite league. ItŌĆÖs the same in Italy, France and England that two or three clubs dominate the scene. IŌĆÖve penned my thoughts about the 6 Nations several times. For example: http://4theloveofsport.co.uk/2019/03/21/is-the-womens-six-nations-in-good-shape/

Yes, there are lots of fascinating possibilities available to Middleton. The trouble is, the crunch game comes first up. He must pick the side he can trust to produce the goods. In her latest pod Rachael Burford said the No 15 must be safe under the high ball, hence Sarah McKenna. IŌĆÖve seen both Dow and Attwood fail in this respect this season. Wing is a major source of strength with Thompson, Breach, Smith and Dow. Hard to leave out a player who scored 2 unforgettable tries in a world cup final against the worldŌĆÖs best, and played Woodman off the park in Rotorua. Sad thing is: wingers rarely figure on the bench. If they can offer a second option (full-back) they have a chance. That means Dow. A concern is No 7. I think the management prefer specialist flankers. Once Marlie Packer is counted out, that leaves only Vicky Fleetwood with the necessary pace and know-how on the open-side. Of the ones you mention, Cokayne fits the bill excellently. But sheŌĆÖs 1st-choice hooker. Has Kerr ever played back-row? Beckett was only filling in in the second row, surely. Yes, lots of talent waiting in the wings. Makes you wonder whoŌĆÖll retain their contracts next year. Harriet Millar-Mills was invited in to join the test squad recently.