ParalympicsGB enjoyed their most successful day at Rio 2016 on Sunday with 21 medals won across five different sports – more than the best single day at London 2012 (18) and Beijing 2008 (19).

It was a best ever Games haul for ParalympicsGB rowers with three golds and bronze won on finals day – golds for Rachel Morris (single sculls), Lauren Rowles/Laurence Whitley (mixed double scull) and the mixed coxed four plus bronze for Tom Aggar.

While in the evening, there were seven swimming medals – including a second Rio gold for Bethany Firth in the 200m freestyle S14 – and three athletics medals with Jo Butterfield (pictured above) setting a new world record on the way to the women’s F51 club throw title and Richard Whitehead defending his T42 200m title ahead of teammate and bronze medallist David Henson. 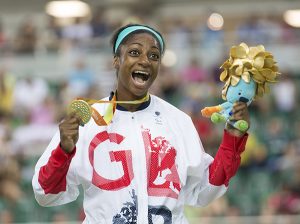 She becomes the first British Paralympian to win medals in two different sports at the Games since Isabel Newstead, who won shooting bronze and athletics silver and bronze at the 1988 Games in Seoul.

ParalympicsGB added three golds, one silver and two bronze to their medal tally on day three in Rio.

Andy Lewis made history as the first ever para-triathlon gold medallist while Hannah Cockcroft retained her 100m T34 title – one of five medals won at the Olympic Stadium.

She was followed home by Kare Adenegan who claimed silver before Toby Gold and Andrew Small won silver and bronze respectively in the men’s T33 100m while Sabina Fortune won bronze in the F20 shot put.

ParalympicsGB won a remarkable 16 medals on day two, including seven golds across athletics, cycling and swimming.