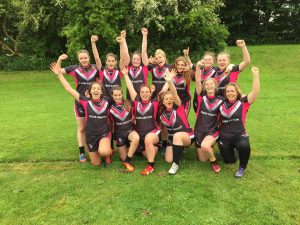 The team, which will be an Open Age side, has already recruited a respected coaching team, led by Head Coach Lindsay Anfield, who has played for England Women and recently coached the England Students Women’s team, while she is also the Head of PE at De Lacy Academy.

Lindsay will be joined by assistant coaches Jonny Payne and Danny Holmes, who are both teachers at Castleford Academy, where they helped the Year 9 Girls pick up a national title in London last weekend (pictured right).

Castleford Tigers Women Assistant Coach Jonny Payne told castlefordtigers.com: “Myself and Danny recently set up Cutsyke Raidettes under 14s and under 16s and we wanted to develop a pathway for the older girls to progress within the Castleford area.

“We had discussions with Steve Gill and Richard Pell and we are delighted that they have given the idea their full backing and allowed us to become Castleford Tigers Women RLFC.

“There’s a great deal of pride in wearing the Castleford shirt and the group of women we have on board can’t wait to get started.”

“After meeting with the coaches, we were so happy with the passion, the drive, and the ambition they have to help the team progress.

“We’ll be doing all we can along the way to help the new team develop.”