Megan Giglia won ParalympicsGB’s first medal of the 2016 Paralympic Games with victory in the C1-3 Individual Pursuit on Thursday evening.

The Stratford-upon-Avon para-cyclist caught opponent American Jamie Whitmore in the gold-medal ride to take the title on her Paralympic Games debut.

The 31-year-old had earlier broken her own world record in the heats when she recorded a time of 4:03.544.

She said: “To be fair it hasn’t sunk in yet, all I know is I wouldn’t be here without my team, the back up crew behind me here, my family and friends.

“I I only look forward to the future. I didn’t think I would make it to Rio, I thought it was a bit ambitious but I thought I would give it a go.

“Within the British camp the atmosphere is great, everyone is hyped up and ready to go.

“I hope this will be the first of many golds, I’ve still got three events to go so we’ll have to see. I’ve got my main event out of the way now so I can just enjoy the rest of them with my legs peddling fast.”

Gold for para-cyclists Stephen Bate and pilot Adam Duggleby as they continued ParalympicsGB’s success on the track on day one of Rio 2016 with gold in the 4000m individual pursuit.

Mytholmroyd’s Bate and pilot Adam Duggleby, from Hull, beat Dutch duo Vincent ter Schure and Timo Franson to gold in a time of 4:08.631. 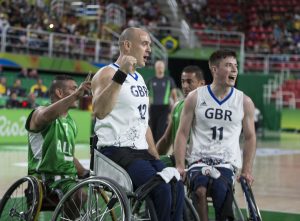 They got their Rio 2016 campaign off to a winning start as they defeated group B opponents Algeria 93-31 at the Rio Olympic Arena on Thursday.

Coming up against a team making their Paralympic Games wheelchair basketball debut, ParalympicsGB put on a strong showing with Barnsley’s Ian Sagar top scoring with 19 points, as ten different British players got their names on the scoreboard.

Stephanie Millward swam her way to a bronze medal in the 400m freestyle S8 on day one of the Rio 2016 Paralympic Games.

Millward, who is from Corsham and trains in Manchester, touched the wall third in 4:49.49 behind Australia’s Lakeisha Patterson who won in a world record time of 4:40.33.

The bronze represents Millward’s sixth Paralympic medal after four silvers and a bronze at London 2012.

She said: “Everyone is swimming really well in a really fast pool. It’s been exciting because I’ve got a whole new set of competitors. I’ve got a few more races and I’m really excited for them.”

Hynd lowered his own world record to touch home first in 4:21.89 and upgrade on the silver he won in London 2012.

Harriet Lee won ParalympicsGB’s third swimming medal of Rio 2016 as she finished second in the 100m breaststroke S9 final, one place better than the bronze she won at London 2012.

Having already seen Ollie Hynd and Stephanie Millward claim medals on the opening day, Cambourne’s Lee came home in a time of 1:16.87 to finish just over a second behind the Netherlands’ Lisa Kruger.

She said: “I just wanted to get out there. The last four years have been a struggle so to get down to this point and swim that time in that race, I feel so happy.

“I have such amazing support back home and Team Lee have been phenomenal. It is not just me, there is a network behind me that have dragged me through some difficult times so it is great to be able to share it with them.”

The Torpoint three-time Paralympian won the first game 11-5 in just four minutes before recording 11-7 and 11-5 successes in the next two games to wrap up the win inside 17 minutes.

Fellow Londoner Jane Campbell was in action in the class 3 singles although the two-time Paralympian was unable to get off to a winning start, losing 3-0 (11-7, 11-7, 13-11) to world champion Qian Li of China inside 19 minutes. She will next take on Turkey’s Hatice Duman on Saturday.

In the men’s class 9 singles, Ashley Facey-Thompson was beaten 3-0 (11-4, 12-10, 11-5) by Juan Bautista Perez Gonzalez of Spain in Group C on his Paralympics debut. Facey-Thompson plays the Austrian Stanislaw Fraczyk on Saturday in his second group match.