Great Britain are guaranteed an Olympic medal after a commanding 3-0 win over New Zealand in the semi final in Rio. A double strike from Alex Danson and a penalty stroke from Helen Richardson-Walsh saw off the Blacksticks and set up a clash with the Netherlands, who were winners over Germany in the earlier match. 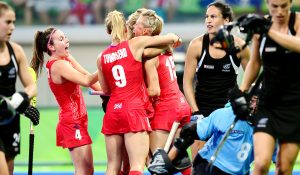 Great Britain started the match with great intensity. Their high press put the Blacksticks defence under pressure and allowed Susannah Townsend and Sophie Bray to threaten with a series of darting runs in and around the circle.

New Zealand forced the first clear chance of the match on ten minutes via a penalty corner. Elizabeth Thompson fired the ball in, looking to find Gemma Flynn at the far post but she was unable to get the touch.

The Blacksticks were growing in confidence and their speedy attack put GB on the back foot. Kate Richardson-Walsh produced an impeccable tackle on the edge of the circle to halt a foray forwards from Anita McLaren before Petrea Webster shot wide on the turn from near the top of the circle. Danny Kerry’s side won their first penalty corner just before the break but the fierce flick from Crista Cullen was well saved by Sally Rutherford.

Great Britain started the second quarter on the front foot. Some lovely approach play from Lily Owsley almost set up Bray but she couldn’t quite get a touch on the pass. Owsley was starting to cause the Blacksticks real problems and linked well with Helen Richardson-Walsh to earn Great Britain a penalty corner. Laura Unsworth took the shot but her effort was touched wide by the defender. 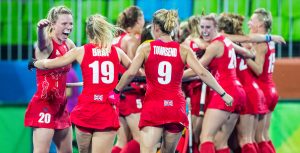 With 22 minutes on the clock, Danny Kerry’s side got their noses in front. Another penalty corner was the source of the opening goal. Cullen’s shot was saved by the goalkeeper but Danson was quickest to react, stabbing the ball home from close range for her fourth goal of the competition.

The Blacksticks reply was immediate but Maddie Hinch was on hand to snake out a right foot to save Flynn’s snapshot. The Kiwis were a whisker away from an equaliser just before the break but McLaren’s drag flick flew wide of the post.

New Zealand had another penalty corner in the first minute of the second half. Kayla Whitelock played it in but Kate Richardson-Walsh stood firm with some stout defending. The next corner they tried the same routine but Cullen was out quickly to charge it down.

Great Britain lost Cullen and then Georgie Twigg to injuries in quick succession as the physicality of the high stakes game started to take its toll. Both returned to the fray shortly afterwards having received some running repairs.

Great Britain almost extended their lead from a penalty corner. Giselle Ansley played a great pass towards Helen Richardson-Walsh for the deflection but Brooke Neal got a touch to nick it away from her. There was a heart in mouth moment at the other end as the clock counted down to quarter time. Olivia Merry found herself clean through but Hinch blocked bravely before Townsend calmly cleared the danger.

Three minutes into the final quarter Danny Kerry’s team grabbed the all-important second goal. Some lovely link up play between Danson and Helen Richardson-Walsh freed the latter who was through on goal. A combination of Rutherford and Kayla Whitelock felled her and a penalty stroke was given.

The Great Britain No8 dusted herself down and coolly slotted the ball in for her fourth goal of the tournament. Great Britain added another just four minutes later, again from the penalty spot. Owsley carved open the New Zealand defence and was brought down, the umpire pointed to the spot again. This time Danson stepped up and made no mistake, matching her total from the 2012 Olympics with her fifth goal of the Games.

Danny Kerry’s side switched to a half court press for the closing stages and were able to close out the game for a famous win, a guaranteed medal and a place in the final against the Netherlands.

Alex Danson, Great Britain striker: “To come away from a semi-final and to be going into a final is unbelievable. But you can’t forget what’s got us here. It’s been one game at a time, building momentum, recovering and playing again. We’ve got one more to play and we won’t change anything about how we prepare.

“There are a number of us who have learnt from some heavy defeats over the last few years. You have them at the back of your mind but actually this tournament has been very much about us and the opposition and taking it one game at a time.

“I believe we have the best tacticians in the world on our management staff and we have very intelligent players who are able to put that on to the field. That’s won us games here – concentrating for the entire 60 minutes and knowing what our roles are.

“We’ve played together and been tight as a unit so to come away with a win is just incredible. There was a bit of relief on my penalty although I think Helen’s [Richardson-Walsh] stroke before that was the most amount of pressure ever and she did such a fantastic job to put it away.”

Danny Kerry, Great Britain: “That makes us the most successful GB women’s team ever at an Olympics. But there’s still one more game to go and they’re going to keep their feet on the ground.”

“They executed brilliantly today. They absolutely played how they’d been set out to do it and it really paid dividends. I was really proud of them playing under pressure in the second half. They kept playing forward trying to take opportunities and I’m really proud of that.”

“Holland in the final – they’ve probably got a bit of a point to prove after the England team and the Europeans. I think it will be a tight, cagey affair. They have some talented players and they will probably start as red-hot favourites but we like it that way.”

“We lost a very tight semi-final to Argentina four years ago [at London 2012]. We’ve adapted some of our training to replicate some of thinking needed in tight games and we’ve learned some lessons.”

Great Britain’s next match is the final on 19 August live on BBC One against the Netherlands, at 9pm