Rajiv Ouseph booked his place in the knockout stages of the men’s singles competition at Rio 2016 with a confident victory over Japan’s Sho Sakaki yesterday (Sunday).

The 29-year-old eight-time national champion from Hounslow advanced with a 21-15, 21-9 win over world number 25 Sakaki, avenging his quarter-final defeat at the 2015 Yonex All England Open Badminton Championships.

Ouseph had already defeated the Czech Republic’s Petr Koukal in the first group match and has now booked his place in the last 16, where he will face Indonesia’s 2014 world bronze medallist Tommy Sugiarto. 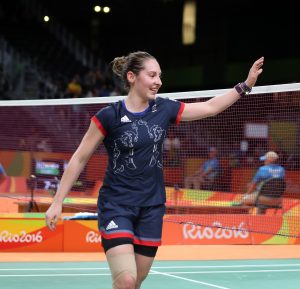 But it was not to be for Kirsty Gilmour in the women’s singles as she missed out on qualification to the knockout stages following with a 2-1 loss to Bulgaria’s Linda Zetchiri, bringing her Rio 2016 adventure to an end.

Ouseph, who is seeded 13th in Rio, and was the highest ranked player in his three-man group, started impressively against Sakaki, racing into an 11-5 lead by the break with an array of quality hitting.

Sasaki fought back strongly to take a 13-12 lead – with the tightness showing exactly why the two held a 3-3 head-to-head record.

But a pin-point Ouseph smash gave him a 15-13 advantage, eventually closing out the game 21-15 to hold a vital advantage.

And the momentum of the Team GB star carried through to game two, reaching the halfway break in a strong position at 11-4.

It was a lead Ouseph never looked like relinquishing, gliding his way across the court to prevail 21-15 21-9, reaching the last 16 in his second Olympic Games.

“I knew this was going to be the crucial game when the draw came out so I am very happy to have won and I am looking forward to the next round now,” said Ouseph.

“It looked comfortable but it wasn’t always that comfortable. I think the first set was quite crucial and when he came back a little bit at me it was important to stick it out there and be tough.

“Last time (in London) I was a bit nervous with it being my first Olympic Games experience and I was not sure how I should act or react and stuff.

“So having done this one time before I think it has helped me this time around and I will try and use that in the next round.”

Gilmour, the world number 15, also made a strong start against Bulgaria’s Zetchiri, having been forced to wait most of the day to play at Riocentro Pavilion 4.

Gilmour said: “I do tend to come out very fast and not a lot of people can keep up but she caught up to the rhythm and she knew what was coming rather than it being unexpected.

“She caught up to the pace and to her credit that’s the best I’ve seen her play for a long time. She must have been working hard over the summer.

“I think I went a bit tight in the second. I couldn’t seem to find the baseline.

“So I just didn’t manage to find the right weight of shot but that’s just something I need to work on and learn from.

“I hope I’m only at the start of my career and I’ve got many more tough lessons to learn on the way.”