Great Britain’s superb run of form at the Olympic Games continued with a fifth win from five games, seeing off the USA 2-1. Goals from Sophie Bray and Alex Danson overturned Michelle Vittesse’s opener and secured top spot in the pool for Danny Kerry’s team. 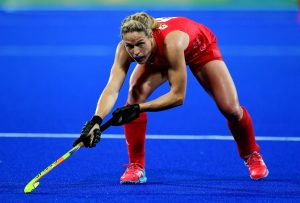 The two sides had met three times previously at an Olympic Games with two draws and a 1-0 win for GB and this match proved to be equally tight. The USA started fast and went close via a backhand shot from Katie Bam which flashed narrowly wide and then Melissa Gonzalez was kept out by some sharp work by Maddie Hinch. Susannah Townsend and Lily Owsley threatened the USA defence with some marauding runs in what was a physical first 15 minutes.

Danny Kerry’s side won their first penalty corner after good play by Helen Richardson-Walsh. Crista Cullen, making her 100th GB appearance, stepped up but Jackie Briggs somehow turned her shot over the bar. Briggs soon took centre stage, gloving away another Cullen penalty corner as the sides went in at the break all square. 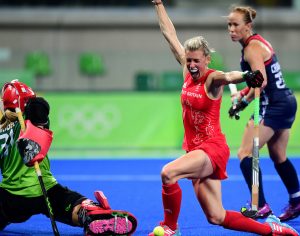 At the start of the second period; Bray showed terrific skills to break into the circle and shoot but again, Briggs got a glove on the ball and turned it over the bar. The USA goalkeeper denied Danson with a good block with her feet and despite the lion’s share of the possession and chances falling to Great Britain it remained 0-0 at half time.

Into the third quarter it was still one-way traffic. Briggs showed her class once more to save from Nicola White and it was starting to look like it might be one of those nights for Danny Kerry’s side.

In the 39th minute, somewhat against the run of play, the USA got their noses in front. Vittesse seized on a loose ball, broke into the circle and found the bottom corner with a lovely finish. 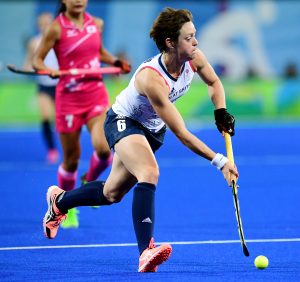 Great Britain showed they are made of stern stuff and despite the setback, with seven minutes remaining in the final quarter they equalised with a lovely penalty corner goal. Giselle Ansley played the ball into Hannah Macleod who on her 150th international appearance slid the ball across goal where Bray was waiting to guide it home.

Three minutes later it was 2-1. Sam Quek played a raking pass into the circle to Danson at the far post. The striker steered the ball in for her third goal of the tournament. GB ended the match with nine players after two late yellow cards to Georgie Twigg and Townsend and with time running out the Stars and Stripes had one last chance from a penalty corner. Lauren Crandall took the shot but Hinch made the save and Cullen completed the clearance ensuring GB took the win and top spot in the group.

Great Britain’s next match is the quarter final on 15 August live on BBC Sport, time and opponent to be confirmed

Kate Richardson-Walsh, Great Britain captain: “If you’d offered us top spot at the start of the week I’d have bitten your hand off. The momentum we’ve created is good. All the sides are excellent in this tournament so I’m really proud of what we’ve done so far.”

“We had a lot of possession and chances but we had to turn those into goals. We had to wait to get on the board but it came in the end. In all the games we’ve shown a bit of difference in what we can do. We’ve been goals up, goals down, played with ten and played with nine. We’re showing we can do all kinds of hockey; now we want to play at our best.  In order to succeed, we need to listen to the tactics. Danny Kerry our coach is a fantastic tactician. If we do what he asks of us we’ll be fine.”

“We had to show resilience tonight. USA are full of positive energy and resilience so we had to feed off that. Momentum plays a big part. The Dutch, Argentina and Australia always do it well. They keep building the performances at tournaments and that’s what we’re doing here.”

“Our first goal was to reach the quarter final. We’ll have a meeting tomorrow by which time we’ll know who we’re playing. We’ll debrief and learn lessons from the pool stages. We’ll watch lots of video ahead to the next match and make sure we’re prepared.”