Great Britain maintained their perfect record with a 2-0 win over a stubborn Japanese side at the Olympic Games. An early goal from Lily Owsley gave GB the lead and Nicola White added a second with five minutes to go as Danny Kerry’s team made it four wins from four out in Rio. 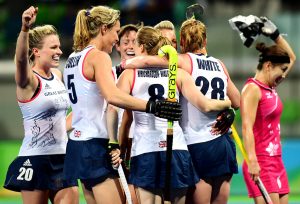 Great Britain had settled the quicker of the two sides and took the lead in the fifth minute. FIH Rising Star of the Year Owsley showed great skills along the baseline to get into the circle and fired the ball across where the unfortunate Miyuki Nakagawa diverted into her own net. A penalty corner soon followed but despite a good shot from Giselle Ansley Japan were able to scramble the ball away.

Danny Kerry’s side dominated the first quarter with some exciting bursts forwards but it remained 1-0 at the break.

The second quarter started with a penalty corner to the Cherry Blossoms. Mie Nakishima smashed it at goal but Helen Richardson-Walsh showed her prowess in defence with a good clearance. Japan started to come into the game more and more and forced another penalty corner. Minami Shimizu hit the shot but Maddie Hinch got down well and then cleared it out with her stick, snuffing out the danger.

At the other end, Hinch’s opposite number Sakiyo Asano excelled herself with a save right out of the top drawer to deny Georgie Twigg. GB survived a late scare in the half. Japan had the ball in the net but the whistle had already gone for a penalty corner, which was overturned after a GB referral.

After the break Kerry’s side increased the pressure as they looked for a second goal. Susannah Townsend broke the line with a good run but her cross couldn’t quite find Danson. Hinch was on hand to deny Hazuki Nagai from a penalty corner and then Sophie Bray’s excellent strike on the backhand was saved by Asano, keeping it 1-0 going into the final quarter.

GB thought they’d doubled their money early in the fourth quarter as Helen Richardson-Walsh smashed in Crista Cullen’s pass. The umpire called for a referral and the goal was disallowed for an infringement in the build up. Bray then went close, showing incredible skills, manufacturing a chance and drilling another backhand in which Asano did well to save once again.

It was starting to look like the second goal would never come but with five minutes to go, GB got what they were looking for. Asano made a splendid stop to deny Cullen from a penalty corner but with the ball popping up White showed terrific reflexes and technique to volley in from above her head.

There was still time for Nagai to sting Hinch’s gloves with another penalty corner but Great Britain were able to close the game out and maintain their 100% record.

Danny Kerry, Great Britain Coach: “I don’t think any of us today would be satisfied with the performance, one or two players had to play well. Laura Unsworth played a mature game and Hollie Webb was also very solid.

“Maddie Hinch also made some important saves but I don’t think anyone will be happy with the team performance. However, we’ve kept a clean sheet, won the game and not played that well.

“So looking at the big picture, we’ve won four group games; we’re definitely in the top two so if you’d offered us that we’d have taken it every day. Today we had to create our own energy and tempo but we didn’t do that.

“We deliberately haven’t looked at other results. The players learned their lesson in a tournament a few years back not to tune in to other teams. We will now because we’re definitely in the top two so we can predict a little bit more. We’re in a good position that we can scout knowing a bit better, but we feel we can match anyone, like we did against Argentina and Australia.”