Rajiv Ouseph and Kirsty Gilmour (pictured above) got GB’s Rio 2016 campaign off to a good start after recording victories in their opening singles group matches on Thursday (11 August). 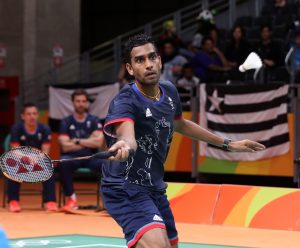 The 29-year-old dominated proceedings to win in just 44 minutes, despite a late rally from Koukal, and faces Japan’s Sho Sasaki on Sunday but the eight-time English national champion insists there is room for improvement.

“I’m happy with that but there is definitely stuff to work on before the next match. It’s nice to get a comfortable victory under your belt before going further into the tournament. It does take the pressure off.”

Gilmour opened her Olympics account with a 21-17, 21-15, win over Switzerland’s Sabrina Jaquet in comfortable fashion.

The 22-year-old must next face Bulgaria’s Linda Zetchiri in her final group game with a victory guaranteeing her qualification for the round of 16 knockout phase, and the 11th seed was pleased to get the first match out of the way.

“It feels really, really good just to get that first one checked off. We’ve had eight days waiting for this so it’s nice to get that under the belt.”

“Having a point to win it and then falling just short is really difficult,” he said.

“We had our chance but we have to be really proud of how we played and being in a group situation means we can still progress. If we keep playing well, we’ve definitely got a great chance.”

In the men’s doubles Chris Langridge and Marcus Ellis also ran the Danish Olympic 2012 silver medallists Mathias Boe and Carsten Mogensen close but were edged out in three games.

The GB duo had initially lost the opening game 21-9 in 19 minutes but they regrouped and levelled the match after taking the second by the same scoreline.

However a couple of decisive net cords in the final game handed the Danes a 21-9 9-21 21-16 win, but Ellis remains optimistic.

“I’m really happy we’ve managed to get our first game out of the way, it’s a first Olympic Games for both of us,” he said.

“I’m looking forward to our next games. In our eyes, we’ve probably got the best pair out of the way, certainly the hardest pair we have to play.”

In the women’s doubles Lauren Smith and Heather Olver lost 21-17 24-22 to Malaysian pair Vivian Kah Mun Hoo and Khe Wei Woon in their opening match, despite a bold performance from the reigning English national champions.

Olver and Smith took their opponents to game point in the second set, but in the end the reigning Commonwealth champions proved too strong and clinched a tight victory.