Siobhan-Marie O’Connor said winning an Olympic silver medal was “the best feeling in the world” after she became the second University of Bath-based swimmer to stand on the podium in Rio this week. 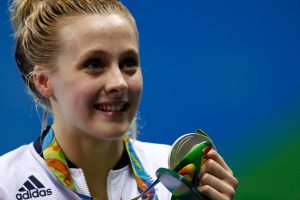 And there could be another medal for the British Swimming National Centre Bath training group in the early hours of Thursday morning after Andrew Willis qualified second-fastest for the men’s 200m breaststroke final.

Team GB’s O’Connor, born and raised in Bath, produced a sensational performance in the women’s 200m individual medley final to take another second off her own British record and touch the wall in 2:06.88.

That was just three-tenths of a second behind Hungary’s Katinka Hosszu, who had to set a new Olympic record of 2:06.58 to win her third gold of the Games.

“It’s the best feeling in the world,” said O’Connor, who is coached by Dave McNulty and Graeme Antwhistle at the Sports Training Village.

“When I looked around and saw the time I was over the moon because I didn’t think I had that in me and I am really pleased to have pushed Katinka as hard as I could.

“It means everything, I have worked so hard for this. I am so grateful to my family in Bath and everyone who has helped me to get here – it’s been tough but so, so worth it.

“I was really confident coming into it because sometimes I can have disruptions but I have had probably the most consistent block of work that I have ever had leading up to this.

“I felt in a really good place. My team have just been amazing at keeping me fit and healthy and in training. It is brilliant and I am over the moon with that result.

“We are just on an absolute roll this week and I am just so proud to be part of the team. Our staff and our coaches and our support team are absolutely incredible, they have done everything for us and we are so well prepared, we have come into this meet with a lot of confidence.”

Twenty-year-old O’Connor has been training in the University of Bath pool since the age of nine, when she joined the former Team Bath Futures development programme.

She progressed to the British Swimming set-up in 2011, the year she made her World Championships debut, and qualified for the London 2012 Olympic Games while still a schoolgirl at St Gregory’s Catholic College in Bath.

Six medals at the Glasgow 2014 Commonwealth Games, including 200m IM gold, confirmed O’Connor’s status as one of British Swimming’s rising stars and she went on to win mixed 4x100m medley gold and 200m IM bronze at the 2015 World Championships

O’Connor’s Olympic silver emulated the achievement of training partner Jazz Carlin in the 400m freestyle on Monday – both are likely to be part of the Team GB women’s 200m freestyle relay team racing on Wednesday.

That final is scheduled for 3.55am BST on Thursday, while the men’s 200m breaststroke final is at 2.03am BST.

It will feature Chemical Engineering graduate Willis, who looked in fantastic form as he won his semi-final in a lifetime best of 2:07.73 to qualify second-fastest overall.

It is a second Olympic 200m breaststroke final for Willis – he was eighth at London 2012 in a race that saw fellow University of Bath graduate Michael Jamieson win silver.