Great Britain made it two wins from two in the Olympic Games, sweeping aside world No 13 India 3-0 with a dominant display. Goals from Giselle Ansley, Nicola White and a second goal of the tournament from Alex Danson secured another three points for Danny Kerry’s team. 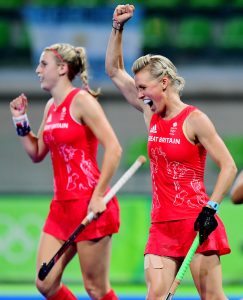 India set their stall out to make life difficult for Great Britain and the massed ranks of blue shirts in defensive positions ensured that the first quarter only saw one clear chance for Danny Kerry’s team. A lovely piece of skill by Danson set it up but her backhand shot was not quite diverted in by Sophie Bray from above her head and it remained all square at the break.

The pattern of play resumed in the second quarter with Great Britain probing and looking for an opening. In the 25th minute Danny Kerry’s side won a penalty corner. Ansley stepped up and fired a precise drag flick past the goalkeeper to make it 1-0. It was 2-0 two minutes later. Good link up play from Danson and Bray set up White to stab home from close range.

Early in the third quarter Laura Unsworth broke out of defence and set Susannah Townsend free. The No9 got to the baseline and crossed, finding Unsworth who had continued her run but the defender couldn’t quite convert the chance and it fizzed wide.

It wasn’t long before the third goal came, however. Lily Owsley carved open the defence with some nice skills and crossed for Danson to apply the finish for international goal number 95. 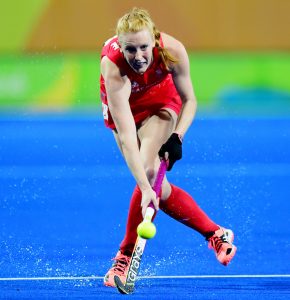 GB forced another penalty corner half way through the quarter but this time Ansley’s shot was charged down. They were soon awarded another set piece and worked a double dummy move but Bray couldn’t quite get the decisive touch and India cleared the danger. Bray then flashed a shot past the far post after some good individual skills in the build up as Great Britain hunted more goals.

In the final quarter India mustered their first chance on goal with a penalty corner. Rani took the shot but it was well defended and the lead remained intact. Bray continued to terrorise the defence and her cross was almost converted by Danson.

With seconds remaining on the clock India had one last chance. Vandana Kataryia was all alone with just Maddie Hinch to beat but the goalkeeper preserved her clean sheet with a splendid save right at the death. Great Britain moved level with USA at the top of the pool with maximum points.

Great Britain’s next match is Wednesday at 17:30 vs. Argentina, live on BBC Sport

Giselle Ansley, Great Britain defender: “It wasn’t our most polished performance but three points are three points and six from the first two games, well you can’t ask for more than that really. It was my first Olympic goal tonight so I’m over the moon.”

“It’s been surreal walking into the village even just getting on the plane to come to an Olympics to be honest. Now we’re here we’re fully focused on the hockey and that’s the only thing for us right now.”

Sam Quek, Great Britain defender: “We knew India would be tough, they like being in contact and short, close skills so we tried to keep out of range, play our game and not get pulled into their tempo.”

“We’re taking it game by game. The fact we have six points is the perfect start. Every game is tough but we have to grind results out and then once we get to the quarters we need to reassess. I had a different kind of nerves ahead of the first game as it was my first Olympic match but today was like any other game.”

“We’ve come off social media to keep in our own bubble and concentrate on ourselves. We’ve had feedback from family and friends that the support back home has been fantastic. Not just in our sport but for people like Adam Peaty winning gold last night and other guys smashing it, so the support for Team GB as a whole is awesome.”