The first day of racing at the Rio 2016 Olympic rowing regatta has been completed at the Rodrigo de Freitas Lagoon in Rio de Janeiro, Brazil. 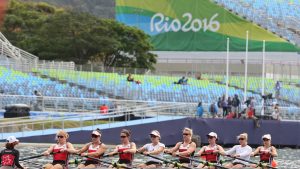 Rowers competing in eight boat classes got the regatta under way with the men’s single sculls starting the day. Olympic Champion from New Zealand, Mahe Drysdale recorded the fastest qualifying time of the 32 nations that made up the men’s single sculls. Cuba’s Angel Fournier Rodriguez had the next fastest time.

The women’s single sculls also had 32 countries competing and Mexico’s Kenia Lechuga Alanis was the surprise winner of her heat when she beat World Champion Kimberly Brennan of Australia. Lechuga also recorded the fastest time of all of the boats to move on to the quarterfinals.

Weather conditions proved to be tough through the middle part of the 2000m race with rowers having to contend with wind gusts causing rough water. This was especially problematic for Serbia’s men’s pair who flipped their boat with 500m left to row. A FISA executive committee decision ruled that Serbia would be granted permission to race in the repechage and therefore keep their racing hopes alive.

Weather forecasts predict that conditions are not likely to get better over the next four days.  “We will continue to use these three factors to determine how racing will continue. As of now, there is no change to the schedule. These tough conditions will test the skill of the athletes,” said Rolland.

The Olympic rowing regatta moves to repechages and further heats for Sunday’s racing of this eight-day regatta. Finals begin on Wednesday 10 August.

You can view all results, here  and view entries and start lists, here.
Report courtesy of World Rowing