Although the official Opening Ceremony hasn’t taken place yet, the Women’s football kicked off on Wednesday and hosts Brazil gave the home crowd a lot to cheer about with their 3-0 win over China. 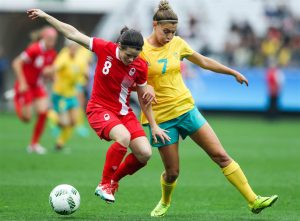 Canada got their Olympic campaign off to a great start with a convincing win over Australia. They also made Olympic history when Janine Beckie scored their first goal after just 19 seconds. It was a game that featured almost everything with the Australian team losing a player to a red card and Beckie also missing a second half penalty but the Maple Leafs went on to win 2-0.

It will be interesting to see how the Matildas bounce back from this loss when they face Germany on Saturday, while the German team will be full of confidence after a dominant performance against Zimbabwe, where they found the back of the net six times to run out 6-1 winners.

Tournament favourites USA beat New Zealand 2-0 and France overwhelmed Colombia with a 4-0 win. While South Africa will have it all to do on Saturday after a 1-0 loss to Sweden.

[It is incredibly sad that the GB team don’t feature in this competition and it seems almost inexplicable when other codes have found an easy solution to the dilemma faced by home nations that the various FAs cannot come to a similar agreement.  Of course its no skin off the noses of the men in blazers but the hard-working footballers, for whom this could have been the pinnacle of their career, all lose out.  For any athlete to represent their country at the Olympics must be an awesome achievement and to have the possibility taken away by politics is shameful.]

Details of the Pools, fixtures and results are below: