Surrey Stars players got a bit of a boost yesterday when they welcomed England great, Alec Stewart to their training session. Stewart is a Surrey Cricket Club director and was happy to share some wise words with the players in advance of the Super League Series. 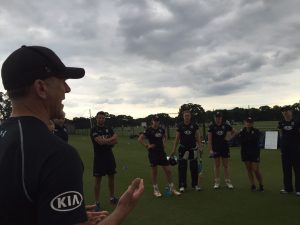 Natalie Sciver will lead the Stars against the Southern Vipers, captained by Charlotte Edwards, when they play their first match in the Kia Super League on Sunday 31st July at the Ageas Bowl beginning at 14.00.

The team will also have been lifted by the signing of  fast bowler Lea Tahuhu and all-rounder Naomi Dattani following the withdrawal, through injury, of Meg Lanning and Kirstie White.

Surrey Stars will play Yorkshire Diamonds at the Kia Oval on Thursday August 4th at 6.30pm and the Lancashire Thunder at Guildford CC on Tuesday August 9th at 2.30pm. £5 for adults, kids for a quid, Members are free!