Grassroots football clubs across the country are being offered the chance to host the Semi-Final draw for the FA WSL Continental Tyres Cup. 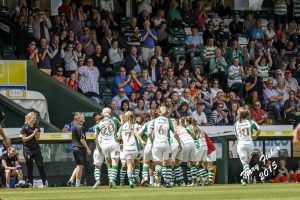 Clubs are being asked to Tweet a picture of their team celebrating to @FAWSL, using #SheWhoDares, to be in with a chance of winning.

The selected club will host the Semi-Final draw, which will take place on Monday 8 August, and will also receive a coaching session and a visit from an England player before the draw.

Clubs have until 9am on Monday 1 August to enter the competition.

This year’s Final will take place at The Academy Stadium in Manchester on Sunday 2 October (3pm KO).

Tickets are on sale now, priced £7 for adults and £3 for concessions. A family ticket (two adults and two children) is available at £15 and group booking and Charter Standard discounts apply.

The competition’s remaining eight clubs will compete for a place in the Semi-Finals on the weekend of 7/8 August. There is a repeat of last year’s Final with holders Arsenal taking on Notts County and Manchester City will play Doncaster Rovers Belles. Birmingham City will host Liverpool and in an all FA WSL 2 tie, Sheffield FC will play London Bees.

Tickets for the Final can be purchased here.

Report courtesy of the FA