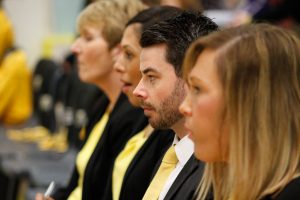 The announcement comes after Ryan’s debut season in charge of the Black and Yellows saw him lead the club to the Superleague Grand Final.

Melbourne-born Ryan leaves Manchester with a heavy heart, but the 32-year-old could not pass up the opportunity to manage a club in Australia’s top netball league.

Ryan has signed an initial two-year contract with the Thunderbirds – the club he worked at as assistant coach for four years before taking up the post at Thunder last summer.

He will work closely with Thunder over the next month to assist the club with setting up a new coaching set up for the 2017 Superleague season, before heading back Down Under in September.

Ryan said: “I have such mixed emotions at the moment, in one breathe I’m gutted to be leaving Manchester Thunder who have become like a second family to me over the past 12 months, but then I’m extremely excited by the incredible opportunity that has been presented to me by the Adelaide Thunderbirds in the new Australian Netball League.”

The Aussie threw himself into life in the north of England and quickly became a valued member of the famous ‘Thunder Family, where he will always remain.

He will be missed by everyone at Thunder but the club wishes him all the success with his new role in Adelaide.

Reflecting further on his decision, Ryan said: “It was honestly one of the toughest decisions I’ve ever had to make as I have loved every second of the experience here, not only from a netball perspective but the life experience as well. It’s been one of the best years of my life and I can’t thank everyone at Thunder enough for what they have done for me. Without them I wouldn’t be where I am now so I am so grateful for everything. This place really has stolen a piece of my heart and I wish them nothing but the best for the future.”

”The opportunity to re-join the Thunderbirds as the Head Coach with a whole new level of professionalism within the sport in Australia, was just too good to refuse. This is what I have sacrificed so much for and worked towards my whole coaching career, it’s been the dream and now it’s happening.”