Anna Smith’s Wimbledon adventure has come to an end for 2016 after the Team Bath MCTA Tennis player and partner Neal Skupski were knocked out of the mixed doubles competition. 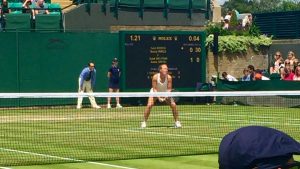 They went into Wednesday’s match against Aisam Qureshi of Pakistan and Kazakhstan’s Yaroslava Shvedova on a high after recovering from 5-2 down in the final set to stun top seeds Ivan Dodig (Croatia) and Sania Mirza (India).

However, despite bouncing back from an early break in the first set, Smith and Skupski were beaten 6-3 6-4 by the number 14 seeds on Number 2 Court.

They took on nine-time singles champion Martina Navratilova and Selima Sfar, going down 6-1 6-3 on Number 3 Court.

South and Keothavong had claimed the scalp of a multiple Grand Slam winner in their first round-robin match of the week, beating Spain’s Arantxa Sanchez Vicario and Croatia’s Iva Majoli 6-4 6-2. They will face Czech duo Jana Novotna – the 1998 Wimbledon champion – and Helena Sukova in their final round-robin match.

In the Junior Wimbledon competition, Team Bath MCTA’s Eden Richardson and partner Ema Lazic were beaten 6-2 7-5 by Japan’s Mayuka Aikawa and Ylena In-Albon of Switzerland in the first round of the girls’ doubles.