England women complete their record-breaking summer against Pakistan, in front of packed crowd at the Essex County Ground in Chelmsford, with a 57 run victory in the final NatWest International Twenty20 (IT20) against Pakistan.  The result this evening means that Heather Knight’s England team have won all six internationals against the tourists, backing up a 3-0 Royal London One-Day International (ODI) series triumph with the same score line in the NatWest IT20s. 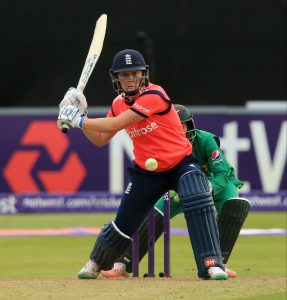 Throughout the six matches the players have all played their part in marking the start of a fresh era for England women’s cricket under the new leadership of captain Heather Knight and Head Coach Mark Robinson, by breaking several longstanding team and individual records, including:

The result tonight also takes England women’s win tally at the Essex County Ground in Chelmsford to an incredible twelve victories from twelve internationals (five ODIs and seven IT20s) played at the venue.

Speaking immediately after the match tonight, England women’s captain, Heather Knight, said: “It has been a brilliant few weeks for the team, and we have all really enjoyed finishing things with another win here at “Fortress Chelmsford”.

“There was a fair amount of pressure on us coming into this series of matches against Pakistan, so it has been really pleasing that we have played with such positive intent throughout, and let our cricket do the talking.  As a group we worked really hard to prepare for this summer, so to see records tumble in the manner that they have is fantastic.  But this is just the beginning for us.  Over the last six matches we have laid some strong foundations on which to build ahead of what will be a challenging tour to the West Indies in October.”

England’s players will next be in action for their respective teams in the inaugural Kia Super League (KSL).  The KSL gets underway on Saturday 30th July, when Lauren Winfield will lead the Yorkshire Diamonds out at Headingley against Loughborough Lightning, captained by her England team-mate Georgia Elwiss.  All six teams will compete in a round-robin T20 competition over a 16 day period, with everyone bidding to qualify for finals day at the Essex County Ground, Chelmsford on Sunday 21st August.

The key aims of the Kia Super League include the development of ever higher standards for the England women’s team with greater competition for places, alongside inspiring more women and girls to play cricket at all levels.  It will offer new opportunities, new role models, and a network of six brand new women’s teams linked to their communities.