England Women continued where they left off in the ODI series against Pakistan, by beating the tourists by 68 runs in the first of three NatWest T20 internationals. With records continuing to tumble. 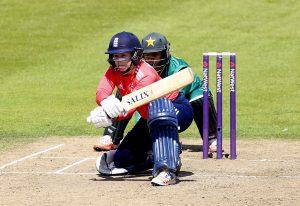 Having chosen to bat, on winning the toss, at the Brightside Ground, Bristol, England made light of the Pakistan attack with Lauren Winfield and Tammy Beaumont putting on a record first wicket partnership.

The pair, who were prominent throughout the ODI series, were at it again as Pakistan suffered badly on a typically straightforward Bristol wicket.

Beaumont’s free hitting was a feature of England’s performance in the ODI victory at Taunton.And the diminutive opening bat, once again struck the ball to all four corners on her way to yet another 50, off 33 balls.

Winfield, who also took 33 balls to post her half-century, survived two DRS reviews, but looked in decent touch as England powered through the 100 run barrier in the 12 th over.

Beaumont was eventually dismissed for 82, but not before she had played the leading role in a record first wicket stand in England Women’s T20 cricket, of 147. It took the pair just 95 balls to achieve that feat with Beaumont hitting 10 fours and two sixes in her 53-ball stay at the crease. 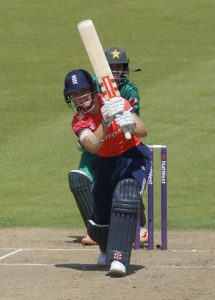 Winfield continued to bat with great purpose as England piled on the agony for Pakistan. Natalie Sciver joined in the run-fest, but was happy to play a supporting role until Winfield top edged a delivery from Sadia Yousuf to Bismah Maroof at extra cover at 171 for 2 in the 18th  over. Winfield struck 10 fours and a six in her 45-ball 74.

Although Pakistan took three wickets in as many balls in the final over, including the run out of Danielle Wyatt, England’s 187 for 5 overtook their previous highest in T20 cricket, against South Africa in 2007. Nida Dar was the pick of the Pakistan attack, returning figures of 2 for 28 off four overs.

Pakistan, who have shown greater quality in the shortest form of the game in recent times, made a decent start against Katherine Brunt and Sciver, until Javeria Khan (14) scooped a full toss, off Sciver, to Heather Knight at mid wicket.

Sidra Amin and Mahoof did their best to pick up the pace, but the latter misjudged a slow full toss from Jenny Gunn and offered Danielle Hazell a simple catch at 42 for 2, in the 8th  over.

^ Reserve day: as per the ICC Women’s Championship Playing Conditions, in the event of the match not being completed on the scheduled date, a reserve day (the following day) is in place for each of the Royal London ODIs.

Live television coverage and radio commentary will be provided for all six England women’s internationals against Pakistan women via Sky Sports and BBC Radio respectively.