The 26-player England Women squad that will tour to Salt Lake City, USA has been announced today.

The side, which will travel on Monday for their three-game summer tour, holds a wealth of experience sharing 682 caps in total.

Alex Matthews and Megan Jones have been recalled from the sevens programme for the tour. 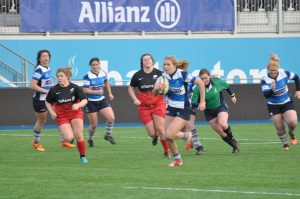 Two new names, in Darlington Mowden Park Number 8 Zoe Aldcroft and Bristol forward Sarah Bern, will be looking to secure their first senior England caps having progressed through the England Women U20 programme. Other names returning to the side include Laura Keates, back from injury to try to gain her 50th England cap, and Richmond wing Fiona Pocock who also returns from time on the sidelines.

England’s schedule for the tour sees them play three games, against Canada, USA and France, over the course of two weeks.

Featuring the top three teams from the 2014 Women’s Rugby World Cup, the sides will train at the University of Utah ahead of match days, with all matches to be played on the championship field at the Regional Athletic Complex.

Lead coach Scott Bemand said: “This tour is an important opportunity for these girls to come together and play some of the top sides in the world. For those who haven’t been through the World Cup environment previously, they will experience everything there is around the tight turnaround of games and an away tour.

“We are really excited about the group of players travelling as it gives us the opportunity to further evolve our style of play.”