A brace from Helen Richardson-Walsh handed Great Britain a draw in their opening Hockey Champions Trophy match with Argentina. Danny Kerry’s side twice came from behind having trailed to Maria Granatto’s goal and then Carla Rebecchi’s penalty corner, however thanks to Richardson-Walsh’s heroics it was all square at the final whistle. 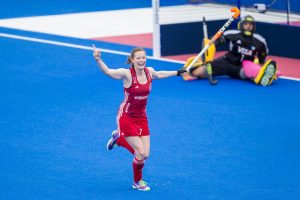 The first quarter was a cagey affair but with seven minutes gone the hosts fell behind. Argentina made their way into the circle and despite an initial save from Maddie Hinch, the ball  dropped nicely for Granatto who slammed it home to make it 1-0. Las Leonas were enjoying a good spell of pressure and forced a series of penalty corners. Hinch saved well from Noel Barrionuevo and then Helen Richardson-Walsh cleared off the line brilliantly from the same player to keep the score 1-0 at the break.

In the second quarter Danny Kerry’s side pressed further up the field and it almost paid immediate dividends. Lily Owsley robbed the defender just outside the circle and her cross was a whisker away from a diving Sophie Bray. Great Britain were firmly on the front foot, forcing Argentina into a number of errors but their dogged defence kept the home side at bay and it was still 1-0 at the half time interval. 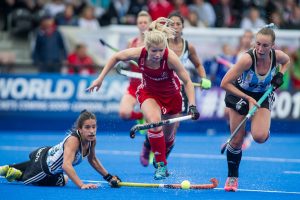 It wasn’t 1-0 for much longer, however. Great Britain levelled with their first attack of the second half. Helen Richardson-Walsh broke along the baseline and with the ball finding its way back to her from the goalkeeper she applied the finish from a narrow angle to make it 1-1. Great Britain were still forced to defend and Hinch did well to dash from her line to block from Maria Cavallero before then keeping out another Barrionuevo penalty corner. Bray was causing havoc and almost scored a wonderful goal after her mazy run left a trail of defenders in her wake, only for her shot to go agonizingly wide.

The final quarter started with more pressure from the hosts. Another turnover high up the field let in Georgie Twigg but her placed shot was brilliantly saved by Belen Succi. With 13 minutes to go Argentina took the lead once more. Rebecchi fired an unstoppable penalty corner into the top corner.

Granatto almost made it 3-1 but Hinch denied her again. Great Britain were running out of time but with six minutes to go they got their equaliser. A glorious pass from Sam Quek found Helen Richardson-Walsh in the circle and she tipped the ball in to the delight of the home crowd. Despite both sides pushing hard for a winner, there was no way through and it was 2-2 at the final whistle.

In the first match of the tournament, USA and Australia also played out a 2-2 draw. Netherlands vs. New Zealand is currently in progress.

Sam Quek told Great Britain Hockey afterwards: “Coming back from a goal behind twice shows really great character. We started a bit slowly in the first quarter, but then we really started to link up and play together. Once we got the nerves out of our system, we showed what we can do – we can tear sides apart.”

“We’ve got the nerves out of our system now, so we can hit the ground running. Each team here is going to be a tough test. The Netherlands are our big European rivals, and we’re unbeaten in the last three matches against them, the highlight being last year in the European Final. I’m sure they’re not really looking forward to playing us – many of this group are the reigning European champions, so we’ll go into the game with lots of confidence. It’s not every tournament that you get to play some of the top sides in the world, so this is a really good test and a good run-in to get us sharp for the Olympics.”

Kate Richardson-Walsh, Great Britain Captain: “I’m disappointed with the start we made. We turned over a lot of possession early on and I think we can be a lot better with the ball. Once we grew into the game, I think we looked good. We showed a lot of grit and determination to keep coming back, but I think we need to start better and keep the momentum up.”

“When the pitch is wet, it plays a little bit slowly. They haven’t necessarily got a lot of pace at the back, so we felt we could capitalise on  both of those to put them under pressure. We moved the ball around well which made it harder to press us.”

“Helen is a magician in the circle – I hate marking her in training, so I wouldn’t like to do it in an international match. She’s always in the right place at the right time, and she’s got an eye for the goal, so whether she’s playing in midfield or in the forward line as she was today, she’s lethal. It was an amazing pass from Sam Quek – it was one of those where everyone was shouting for her to play it wide, but it was a great ball, and she was alert to the opportunity which is the most important thing in these games.”

“This tournament is so tough with the top six teams in the world. Any points we can get we need to get on the board to start to build momentum. If you lose points early on in the tournament, it becomes quite tough later, so I’m pleased we got something.”