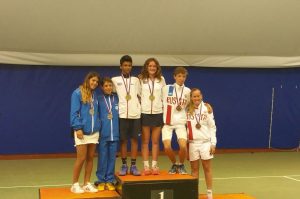 Hayat and Phoebe Suthers claimed the junior mixed doubles gold medal after coming from a set and 4-1 down to beat Israel’s Gabriel Lutsky and Rotem Ashkenazy 3-6, 7-5, (10-7) in a thrilling deciding match tie-break.
Hayat also partnered Toby Clifton to the win the boys’ doubles silver medal, the Great Britain duo having eased past their Turkish opponents in their opening match before a narrow 7-6, 6-3 loss to Russians Roman Malyshev and Jaroslav Revin in the final.
After his gold medal-winning boys’ singles performance at last year’s World Championships in Nottingham, 14-year-old Hayat won the boys’ singles bronze medal at his first European Championships. Hayat was the only junior player to take any games off the Czech Republic’s eventual gold medallist Jasoslav Semedek and wrapped up the bronze medal with a 6-2, 6-1 victory over Revin. 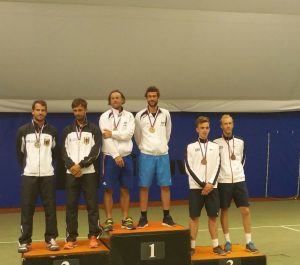 There was an exceptional performance in the senior men’s doubles as Jack Clifton and Lewis Fletcher, who went into the European Championships as fourth seeds, exceeded expectations to win the bronze medal. Clifton and Fletcher produced a fine effort to beat Austrian third seeds and 2012 European Championships bronze medallists Mario Kargl and Robert Gravogl 6-4, 6-3. 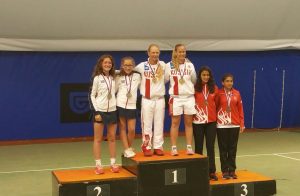 Suthers won a second silver medal in the girls’ doubles, partnering 11-year-old Freya Barry.  Suthers and Barry won their opening match against Turkish opponents with ease before Popova and Smirnova clinched the gold medal match against the Brits 6-3, 6-2.

“We are delighted by the performances of our Great Britain squad at the European Championships and to come back with six medals is a tremendous achievement,” said Geraint Richards, the Tennis Foundation’s Head of Disability Player Performance.

“From Jack and Lewis, bettering their seeding to win the men’s doubles bronze medal, through to Freya winning her first international medal on her Great Britain debut, we are very proud of them all and we have much to look forward as we work towards future championships and the 2017 Deaflympics.”

“This has been a very memorable European Championships with so many promising performances for the future,” added Catherine Fletcher, the Tennis Foundation’s National Deaf Tennis Coach.

“This has been the first European Championships at which I haven’t been a player and after winning mixed doubles bronze with Lewis in 2012 it has been great to see our senior players win bronze in the men’s doubles and watch and study the growth of all our GB players alongside the emergence of other players from different countries.

“The performances of our junior players have been very exciting and they have all acquitted themselves admirably and gained invaluable experience. We can look forward to next year’s Deaflympics with a solid foundation and I’m sure we will inspire many more people to take up the sport so they can enjoy playing it with friends and family or even end up representing their country!”

Report courtesy of the Tennis Foundation.