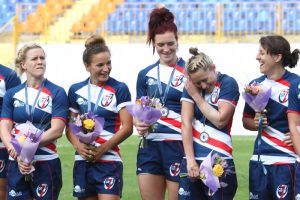 An eight-try final game against Spain saw the Royals land the Plate, having been knocked out of the Cup competition by their GB counterparts 5-24.

Following their semi-final disappointment, where Russia clinched the spoils in the dying seconds, GB Lions came back fighting to beat Ireland 32-0 for third. The Lions dominated throughout, with a brace of tries each for Vicky Fleetwood and Jo Watmore, supported by touch downs from Abbie Brown and Claire Allan.

Head coach Simon Middleton said: “Obviously I am disappointed as we came here with the intention of winning. The Lions played really well in five games but failed to execute to our standards in the Russia game.” 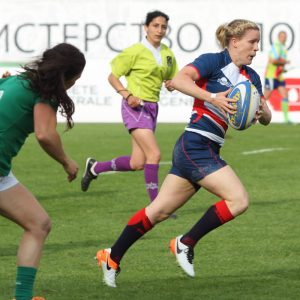 GB Royals finished day one second in Pool A, having found eventual winners France too good, losing 7-31, while beating the Netherlands (19-10) and Finland (44-0). Following their quarter-final loss, they faced Portugal in the semis and a hat-trick and two converted tries from Emily Scott, plus two tries from Megan Jones and one from Stephanie Johnston, secured an easy 36-0 path into the Plate final.

With this GB Women’s last competition before the Rio 2016 Olympic Games, Middleton added: “Although ultimately it was disappointing from a team performance, there were some outstanding individual performances and from that the final selection picture has become clearer.

“Ultimately we came third but that’s not what we wanted and we need to find the missing five per cent on a more regular basis as that is what will be needed to medal in Rio.”