Jordanne Whiley and Gordon Reid both beat higher ranked players on Thursday’s opening day of the Roland Garros wheelchair tennis event to reach the men’s and women singles semi-finals, Whiley doing so at the expense of world No. 1 and defending champion Jiske Griffioen.

On a good day for players on the Tennis Foundation’s Wheelchair Tennis World Class Programme, Reid and Whiley also reached the men’s and women’s doubles finals. Whiley and Japan’s Yui Kamiji won a deciding match tie-break in their semi-final that also saw Lucy Shuker on the other side of the net. 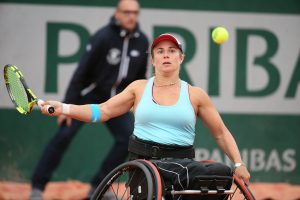 World No.4 Whiley made a sensational start to her latest singles campaign in Paris against top seed Griffioen, racing through the opening set 6-0. Griffioen hit back to take the second set, but Whiley secured an early break in the decider and maintained her cushion to wrap up a 6-0, 2-6, 6-3 victory.

“I was just focusing on my game today and trying to worry less about Jiske’s,” said a highly-delighted Whiley after beating the Dutchwoman for the third time to reach her first Roland Garros singles semi-final. “I kept good movement around the court, which was tough on wet clay. Every match at a Slam is really difficult and, I’ll be honest, I’m not a fan of playing on clay, as it doesn’t suit my game, but I adjusted well today.

“I can’t believe I’ve beaten the world No. 1 when I’ve never won a singles match here in Paris. But I had a new game plan and played to my strengths more. After winning the US open last year I’ve got more self-belief that I can beat these guys, so I’m going for the title and I’ve got two matches left to do it,” added Whiley, who will now play German world No.5 Sabine Ellerbrock for a place in the final.

British No.2 and world No.7 Shuker put in a solid effort as she tried to join Whiley in the women’s singles semi-finals but eventually bowed out to Dutch world No.6 Marjolein Buis 6-1, 4-6, 6-2. 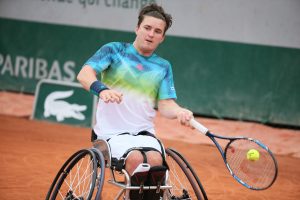 Gordon Reid, also world ranked No. 4 in men’s singles, edged a close first set against world No.3 Peifer after the Frenchman retrieved a break to level at 5-5. However, the Australian champion clinched the breakthrough in the second set to seal a 7-5, 6-3 victory for place in his third Roland Garros men’s singles semi-final.

”I’m really happy with how I played in quite tricky conditions in the cold. I think everyone was feeling it a bit out there so I’m glad I could stay focused and dictated the points,” said Reid, who will now play French world No.1 Stephane Houdet in the last four. “It was a tough match and you never quite know how Nico is going to play so I had to stay on top of each point as he’s such a tough opponent.

“I’m here to win the singles and follow up from my success in Australia, so am really looking forward to playing in the semis tomorrow and warming everyone up in the crowd!

Reid and Japan’s Shingo Kunieda began the defence of their men’s doubles title in fine form when the second seeds defeated Argentina’s Gustavo Fernandez and Joachim Gerard of Belgium 6-2, 6-3 in their semi-final. They will find out who they will play in the final during Friday’s scheduled second day of play.

With a Brit guaranteed a place in the women’s doubles final, Shuker and Buis made a promising start to their semi-final against second seeds, 2014 champions and 2015 runners-up Whiley and Yui Kamiji. However, Whiley and Kamiji held on to win a thrilling contest 4-6, 6-4, (10-3), reaching their third successive Roland Grarros final. They will also find out on Friday who they will play in the final as they continue their quest for a seventh Grand Slam doubles title together.

Report courtesy of The Tennis Foundation