1st round of the Super 6’s and a trip over the Pennines for Featherstone Rovers Ladies to Wigan on a hot sunny Sunday. 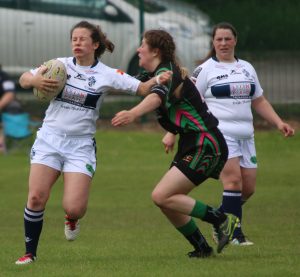 The game started with the Wigan St Patrick camped in Featherstone’s half of the field, but a fine defensive effort from Rovers kept them scoreless and after 7 minutes a scrum 10 metres out from Rover’s try line resulted in Sarah Dunn receiving and racing the full length to score, (successful goal kick from Katie Cooper-Birkenhead).

As the game progressed Featherstone Rovers showed their attacking ability, moving the ball sweetly left to right through Sarah Dunn, Jess Hammond, Andy Dobson to Jasmine Rowley who cut back inside to touch down, (successful kick again from Katie Cooper-Birkenhead).

The Wigan team tried hard to cut the deficit but were being met by a strong, hard-working away defence.

The next score came when Kayleigh Bulman, then Jess Hammond made good runs and the ball reached Emma Hardy to go over for her 1st try of the game (goal kick from Katie Cooper-Birkenhead). 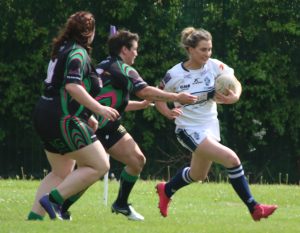 Shortly afterwards Wigan were awarded a penalty under the sticks and took the 2 points.

But, the final points of the half went Rovers way, when Andy Dobson capitalised on more good approach play to score and that was quickly followed by Emma Hardy taking the re-start kick off and sprinting 80 metres, (both goal kicks successful by Katie Cooper-Birkenhead).

With the home team on the back foot they kicked off the 2nd half, Amy Smith took a fine catch and drove hard at the defence, from the play the ball Jasmine Rowley took the pass to score her 2nd try. 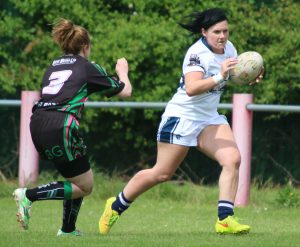 Rovers scored two further tries when, first Sarah Dunn intercepted a pass, on a promising attack play by St Pats, on her own 30m and outpaced the full back to go over. Katie Cooper-Birkenhead then gave a neat pass to Nat Harrowell after a dummy drop off pass fooled the Wigan defence. Nat Harrowell showed great technique touching the ball down one handed with several defenders on her back. (Both tries converted by Katie Cooper-Birkenhead).

Emma Hardy (lead photo above) was named player of the match, followed by Kaitland Firth and Nat Harrowell.  The result was a great team effort from Featherstone Rovers Ladies in hot conditions.  Katie Lyons put in a good performance on her debut.

Credit to Wigan St Pats for putting in a great shift but they came up against a really strong Rovers team.