Watch out for the name Anoushka Williamson because I can guarantee it is one you will be hearing a lot in the future. 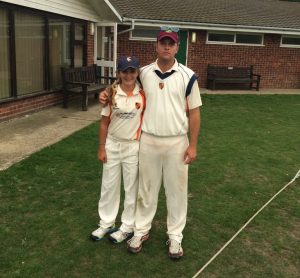 Anoushka, a pupil at Diss High School, started playing cricket with her brother as a youngster and at 9 years of age was picked to play for Diss Cricket Club under 11 side.  Despite her age, Anoushka had already impressed with her training ethic and her consistency.

By the age of 11 Anoushka had trialled for the Norfolk County team and been picked for their under 13 squad, making her debut at 12 she has been a regular ever since.

Last season, aged just 13 Anoushka played for Diss under 17 boys team and this year at 14 she has been picked for the Norfolk Ladies team.

After excelling for the Norfolk under 13s last year, where she had the best average for batting and bowling in the team, Anoushka’s talent was recognised by the County and she was one of just three girls to be invited to train with their Centre of Excellence squad over the winter.

The Centre of Excellence is specifically for youngsters identified as potential first class players, so it is indeed an honour to be selected.

Over the winter Anoushka also trained at Essex, which is a first class professional team, and as a result has made significant improvement to her already very good game; she is an off-spin bowler and an opening batsman.  Just two weeks ago Anoushka got 5 wickets for 3 runs against Lincolnshire!

Most Saturdays throughout the summer Anoushka plays for men’s teams but on the 29th May she will be playing for Norfolk Ladies against the Netherlands at Horsford Cricket Club, the match begins at 11am.

This is an exciting time for women’s cricket, the England team received professional contracts last year and this summer we will see the Super League take place with all the big names from across the world competing in the competition.  Hopefully it will be a huge success and next year we will see more teams taking part. The county game is also thriving and the England team drawing bigger and bigger crowds.

We look forward to watching Anoushka’s progress as she competes across the county and we wish her every success.