Featherstone Rovers Ladies over-powered the Oulton Raidettes in round 5 of the league. 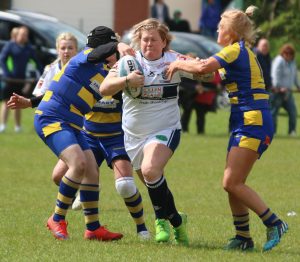 The away team settled quickly as Tash Fox put Featherstone on the board with a score after just 6 minutes.  Katie Cooper-Birkenhead put up a right to left high kick on the last tackle, which bounced beyond an Oulton defender, and was collected by Erica Zanre, who passed to Tash Fox to score.

Several plays later Jasmine Rowley received the ball, burst through two defenders before being tackled just short of the line. From the resulting play Sinead Peach dived over to touch down, converted by Katie Cooper-Birkenhead.
Both defences were working hard and Rovers were held up over the line several times. However, the home defence was caught short on the last attack of the half when, following a scrum 20 metres out, the ball was shipped right to debutante full back Emma Hardy to score her first try, once again Katie Cooper-Birkenhead kicked the extras.
Half Time score  Oulton Raidettes 0 – 16 Featherstone Rovers Ladies 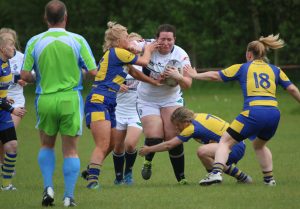 Just ten minutes into the second half and Emma Hardy held on superbly to a pass from Jasmine Rowley to go over for her second.

The home side were defending resolutely but continual pressure from Featherstone resulted in Jess Hammond crashing over from acting half, the extra 2 again scored by Katie Cooper-Birkenhead.
Oulton then had a good spell of attacking, putting up numerous high kicks but Featherstone’s defence stood firm and Kaitland Firth did well diffusing a couple of these under great pressure.
Five minutes from time Katie Cooper-Birkenhead collected the ball, ran diagonally at the Oulton players and following an excellent dummy run from Jasmine, spotted the gap that opened up in front of her to score and then added the goal.
Final Score 0 – 32
Although the score makes it look one-sided, both teams played their part in an entertaining game.
Katie Cooper-Birkenhead received Rovers player of the match but every player played their part plus a terrific debut from Emma Hardy on her first senior game.
Thank you to Sue Hayward for the report and Ainsley Bennett for the photographs.
Lead photo shows debutante Emma Hardy
Tags: Featherstone Rovers Ladies, Oulton Raidettes, Rugby League