Just one more day to go till the SSE Women’s Cup Final which is being held for the second time at Wembley Stadium, Saturday 14 May kick off at 2pm. 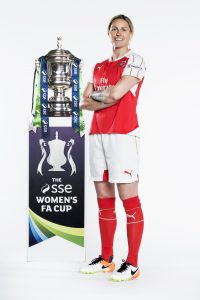 Thanks to the generous sponsorship of SSE children attend for free while adult tickets are just £15 – a fantastic opportunity to watch two great teams battle it out for the FA Cup.

We are at Wembley last year for the first Women’s FA Cup Final at Wembley and the atmosphere was brilliant.  This year the crowd is set to be even bigger, the public are warming to women’s football and its great to see. 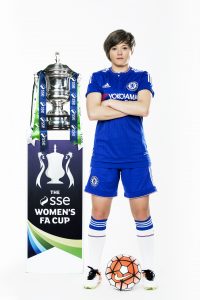 Arsenal Ladies team have won the FA Cup more than any other team with an incredible 13 wins under their belt, whilst Chelsea Ladies will be looking to win successive titles.

Both teams are stacked with talent but Arsenal must have the edge on experience with players like Kelly Smith, Rachel Yankey, Fara Williams and Casey Stoney in the dressing room plus they will be looking to avenge the league defeat Chelsea inflicted just last month.

On the other hand Chelsea are flying in the league and they have the twinkling feet of Fran Kirby, the craft of Ji So-Yun and the grit of Katie Chapman and Claire Rafferty to name but a few.

All in all a mouth watering prospect in store and I for one can’t wait.