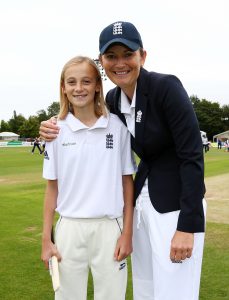 The 36-year-old batsman made her international debut as a 16-year-old in 1996, and during a 20-year career with England has made more international appearances than any other female cricketer in the history of the game, amassing 23 Test Match caps, 191 One-Day International (ODI) caps, and 95 Twenty20 International (T20I) caps.  With 5,992 runs, she is the current all-time leading ODI run-scorer in women’s cricket, and has scored more T20I runs (2,605) than any other player in the world (man or woman).

Appointed England captain in 2006, Edwards has led her country on 220 occasions, taking the team to ICC Women’s World Cup and ICC World Twenty20 glory in 2009, alongside winning the Women’s Ashes three times as captain – once in England (2013) and twice in Australia (2008 and 2014).

In 2008 she won the ICC Women’s Player of the Year award, and during 2014 was awarded a CBE in the Queen’s Birthday Honours list, became only the second woman ever to be named as a Wisden Cricketer of the Year, and was the first female cricketer to be nominated for the coveted ICC LG People’s Choice Award. 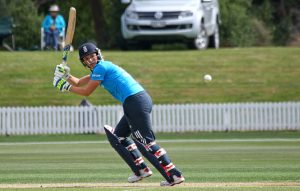 Charlotte Edwards said: “Everyone who knows me – and how much I love playing for England – will appreciate what a difficult decision it has been for me to retire from international cricket. It’s a decision I’ve reached after much thought and detailed discussion with Mark Robinson and Clare Connor about what is best for the team going forward.

“I have given 20 years to playing for England and I leave very proud of the standing in which the women’s game is held and of my contribution as a player and captain.  As a 16-year-old girl making my debut for England, I couldn’t have dreamt that I would have had such an amazing time with so much success.  I’ve travelled the world, won World Cups and Ashes series and shared it all with some of my closest friends.

“However, nothing lasts forever.  I believe now is the right time for a new captain to lead the team forward and for young players to be given more opportunities to make their mark on the international game.  After honest and open discussions with Mark, it became clear that he wants to build a new team and I fully support that.  I would have loved to have carried on and whilst I am disappointed that I won’t be doing so, I fully understand and respect what Mark is looking to do.  This is a new era and he wants other players to come to the fore to build a strong team.

“20 years is a long time and so I have many people to thank: my family, my friends, every single coach who has helped me get better during my career, all the support staff and my England team mates over the last two decades.  They are all special to me and I couldn’t have achieved even half of what I have without them.  I also want to thank everyone at the ECB for all their support and guidance over the years, and to the incredible fan base that has grown for the England women’s team throughout my career.

“Aside from the team’s successes and my own personal record, I am most proud of where the women’s game is now.  I have loved working with the ECB off the pitch to break new ground and to build a better future for the sport, and I hope to continue to play a role in this moving forwards.”

Tom Harrison, ECB Chief Executive, commented: “Charlotte Edwards has been at the heart of the England women’s team and a major force in international women’s cricket for two decades.  Her outstanding achievements in the game during that time are unrivalled, and in many aspects, are unlikely to ever be surpassed.  She is a credit to her country and our sport, and deserves nothing but celebration and enormous respect for the way in which she has played the game over the last 20 years.  She leaves the most wonderful legacy, having inspired countless women and girls around the world to pick up a bat and a ball and play the game she so clearly loves.

“On behalf of the ECB and everyone involved in England cricket, I would like to thank Charlotte for her very special contribution to the game.”

ECB Director of England Women’s Cricket, Clare Connor, added: “It is impossible to quantify Charlotte’s contribution to England women’s cricket in a few words, so great has her influence and inspiration been as a leader, and so prolific her record as a batsman.  In a staggering career spanning 20 years, she has achieved it all.  She has witnessed great change: from making her debut in 1996 when, aged 16, she paid £50 for the privilege of her first England blazer to turning fully professional for these twilight years of her career.

“Throughout that time, she has adapted, she has thrived and she has become more and more resilient.  But perhaps most importantly she has remained in love with the game.  Unlike her sport and her journey through it, Charlotte the person has barely changed.  Despite the CBE, the professional contract, the media requests and the World Cup medals, she has remained constant, true to herself, an impeccable role model for our sport and, indeed, for all women in sport.  She has given everything to playing cricket for England and the game will forever owe her a huge debt of gratitude.  I wish her every success and happiness as she embarks on the next stage of her life.”

Charlotte Edwards will continue to play domestic cricket, captaining the Southern Vipers in the inaugural Kia Super League this summer, alongside leading Kent in the Royal London Women’s One-Day Championship.

Her replacement as England captain will be announced in due course.