Head Coach Anna Stembridge says she is excited for the future after Team Bath Netball finished the 2016 Vitality Netball Superleague season on a memorable note. 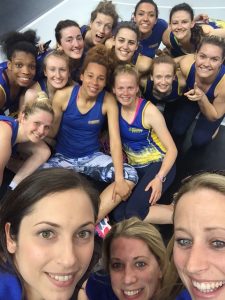 A pulsating 49-48 success against Hertfordshire Mavericks in front of an enthralled crowd at the Copper Box Arena in London ensured Team Bath finished an encouraging season in third place overall.

Now Stembridge and Director of Netball Jess Thirlby are already planning how to improve on that next year as they look to overhaul Surrey Storm, who retained the Superleague title with a 53-51 victory over Manchester Thunder.

“What is really exciting is the potential if we can retain the core of this squad,” said Stembridge.

“We are very much looking to do that and also attract a few other players here. Jess did a great job of recruiting last year and I am sure we will do the same again.

“We will be doing one-to-one and team reviews in the coming weeks, not just with the players but with the coaches and support staff. It is important we go through a rigorous review process and see what we can tweak and improve for next year.

“We went into the season with a group of retained athletes, new athletes and young athletes so we are very pleased to have finished in the top three. We are really proud, especially considering we lost Jazz Scott and Asha Francis so early in the season. We have a quality squad and people have had to earn their right to get out on court.”

Just how that squad has developed during the season was illustrated once again on Saturday as, despite missing Rachel Shaw and Jo Vann through injury, Team Bath produced a tremendous performance to beat Mavericks by a single goal for the second time in three weeks.

It was goal for goal in the opening exchanges before Mavericks opened up a buffer. However, the Blue and Gold responded well and cut the gap to 12-10 at the end of the first quarter.

England defender Sam Cook was introduced for the second period, with Karla Mostert, Claire Brownie and Mia Ritchie all pushing up the court, and the changes had a big impact as Team Bath began to take control.

They edged into the lead for the first time at 17-16 and, with Cook and captain Eboni Beckford-Chambers in magnificent form, took a 26-24 advantage into half-time.

Mavericks came out for the third period with all guns blazing but Team Bath met the challenge head on and still had a narrow 39-38 lead as they began the final quarter of the season.

Team Bath scored twice in quick succession but some mistakes in possession allowed Mavericks to turn the game around and lead 44-42.

However, some massive turnovers from Cook and Ritchie had the crowd on their feet as Team Bath restored parity at 48-48 going into the closing seconds.

Another Mostert intercept then regained possession for the Blue and Gold and they were able to score the decisive goal, ensuring their players would be going home with bronze medals.

“It is testament to the spirit of the girls for them to come back like that after the disappointment of the semi-final defeat to Manchester Thunder,” said Stembridge.

“They got their heads down in training, applied themselves and approached the game like it was a final.

“It was a real captain’s performance from Eboni and Sam’s display when she came on showed why it was a shame we didn’t have her available for the whole season, she was outstanding.”

Mostert and fellow South African Lenize Potgieter flew back to their home country immediately after the match but Stembridge is hoping to see them back in Blue and Gold in 2017.

“Karla and Lenize have not just been great players, they have been great people to have in the Team Bath family,” she said.

“Massive credit to them and Netball South Africa, they have been fantastic. They have really enjoyed being with us and we would love to have them back here next season.”

Team Bath’s players and staff will reflect on 2016’s achievements during the annual end-of-season dinner, which this year is taking place alongside the Netball South West Goalden Globes Awards.

The celebration of netball in the region is being staged at Somerset County Cricket Club in Taunton on Sunday, May 22 from 11.30am to 4.30pm. Tickets, which include a two-course buffet meal, are priced £25 for adults and £15 for under-16s. They are available to purchase from the netball section here.

Among the prizes being handed out is the Supporters’ Player of the Season award. Voting is now under way – visit here  before Monday, May 16 to have your say.