It’s crunch time – The regular season is already a distant memory with a spot in the Grand Final at the Copperbox now Manchester Thunder’s sole focus. 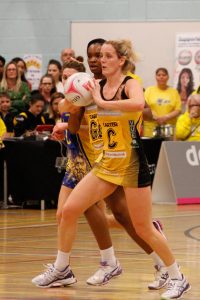 But standing in their way is a resurgent Team Bath side, who have really come into some form in the final phases of the season.

They travel to the Thunderdome with confidence high and the Black and Yellows know they will have to be at their absolute best to beat them.

Captain Sara Bayman – who has been in illustrious form herself all season – is keen to alleviate some of the inevitable pressure that comes with the play-offs.

The centre said: “We wanted to go into semis with a positive mind-set and send a message out and we did that against Mavericks last week.

“You have to approach the Bath game like any other or it becomes something that it’s not. It is just another netball game.

“Of course we are there to win it and we will do our best to make sure that happens.” 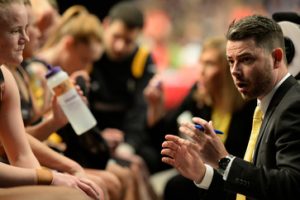 Coach Dan Ryan was delighted with Thunder’s performance in all areas of the court against Mavericks, and was especially impressed with his attack’s composure and effectiveness.

“When you have got classy players Like Sara Bayman and Nat Haythornthwaite feeding the circle, you are always going to have a very composed front line. Especially now with the way Ellie Cardwell is playing,and Kathryn Turner did a great job when she came on – there’s a real confidence there and space will always open up if we’re patient,” he said.

Ahead of the Bath game on Saturday, Ryan believes Thunder’s confidence – which has gradually gained momentum in the past four matches – gives them the best possible chance to win.

But he also knows Bath will be in no mood to give his side a free ticket to the final.

The Australian added: “Our form is very good and we are confident with where we are at the moment.

“We’ve hit good form at the right time of the competition but what we have done before is irrelevant if we don’t put it out on court on Saturday.

“We need to perform when it counts, do our homework on Bath, who have been very well the last couple of weeks – and for us to win we will have to play at our very best.”

Thunder play Team Bath at the Thunderdome in the first semi-final at 4pm. It will be broadcast live on Sky Sports.