In a replay of the Premiership final in January, Richmond Women and Saracens Women came face to face once again in the Senior Cup final. 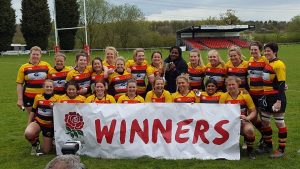 Both teams had points to prove and scores to settle: Richmond were determined to claim the cup title back after losing out to their London rivals in the semi finals last year, and Saracens were gunning for revenge after their Premiership title loss.

Richmond suffered an early blow during the match, losing Captain Ellisha Dee to injury in the opening minutes, which could have dented many a team’s confidence. But proving the strength and depth in the squad, Sammy Crandell came off the bench and added her power to the pack.

Richmond gained the upper hand early on and they pinned Saracens in their own half. The forwards set up a series of strong carries with Claire Phelps battering her way through the defence, supported by her second row partner Sara Anastasi. Saracens then found themselves on the back foot under immense pressure when scrum half Leanne Riley sniped through and put Richmond right on their try line. 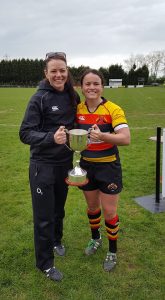 A good passage of play put winger Kiri Lose in space and it looked like try time but a concussion injury to a Saracens player halted play.

Richmond resumed play and began to turn the screw at scrum time 5m out from the try line. Good control from the pack earned them three penalties on the trot and the sideline was calling for a penalty try. It wasn’t needed as Richmond shipped the ball wide for winger Stacey White to score in the opposite corner.

The penalty try then came however when Saracens continued to infringe at scrum time under immense pressure from the Richmond pack. Vice Captain Jackie Shiels converted the try to make it 12-0 at half time.

In the second half, Saracens started strongly and capitalised on a few errors made by Richmond. A visit to the Richmond 22 ends in a knock on and they failed to get points on the board.

The Richmond forwards then took control again, marching their way back up the pitch. A few pick and goes saw Crandell crash over the line to score. Abi Chamberlain converted a tough kick from out wide, bringing the score 19-0.

In full control, and starving Saracens of any possession, Richmond shifted up another gear. This time hooker Davinia Monteiro made a break and went over the line for an unconverted try 24-0.

Richmond empty the bench for the closing stage of the game and it is Riley who has the final say with a well deserved try against her former team. The final score came to 29-0.

The win is Richmond’s 12th National Cup title in the club’s history and their 74th win over Saracens, rounding up a fantastic season where Richmond Women won both the Premiership and Cup titles.